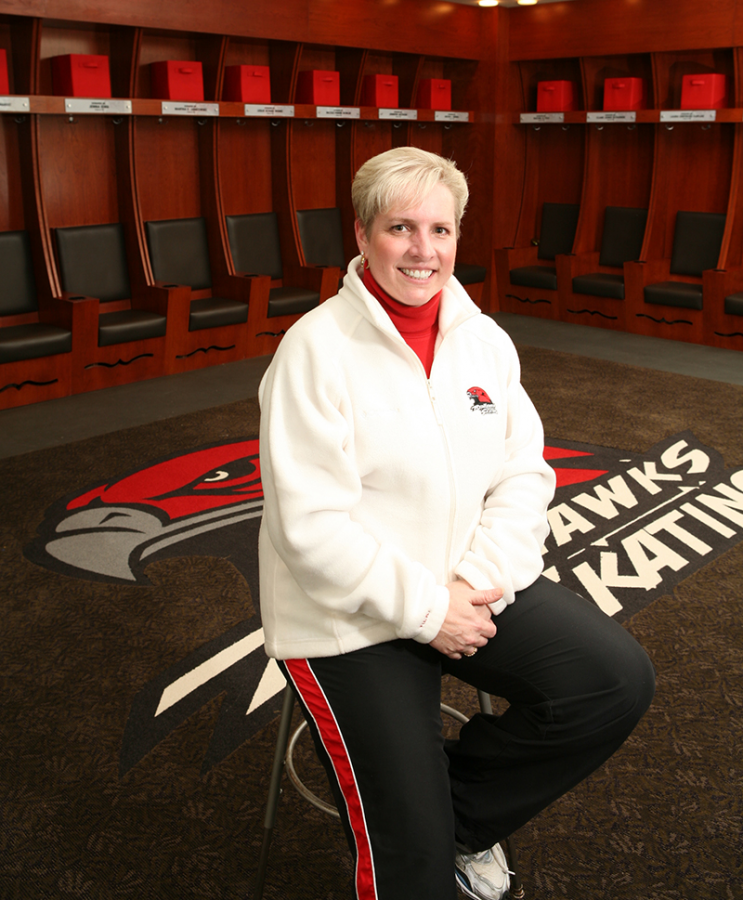 Vicki Korn during her career at Miami. Photo provided by Miami Athletics.

The cause of her death was not given.

Korn, a native of the Chicago area, began her career with Miami in 1984, where she contributed to the community skating program, Miami skating classes and the school’s skating club. By the time she retired from Miami in 2009, she left a legacy not only on the program but on the sport of collegiate synchronized skating as a whole.

Korn won a combined 15 national championships between club and varsity teams in her time at the helm with the RedHawks. She is a member of the school’s “Cradle of Coaches,” a prestigious group of former Miami coaches and players who have gone on to have major impacts on their sports through coaching.

Korn unquestionably fits that criteria. She developed the Miami skating club into a varsity sport, competing against other schools all across the country. Over time, the movement pioneered by Korn caught on around the country, leading to the rise of high-level collegiate skating.

Lee Ann Shoker, now an assistant coach in the Miami program, knew Korn from the time she was coached by Korn at age 9. She emphasized the impact Korn had on the sport.

“Vicki’s career and accomplishments are legendary and put our synchronized skating program on the map — well beyond the footprint of Southwest Ohio and the United States — in the world,” Sayler said.

After coaching Miami to a national championship at the club level in 1993, Korn was instrumental in upgrading synchronized skating into a varsity sport in 1995, making Miami the first school in the country to do so.

From that point, the skating RedHawks won many national titles, becoming a mainstay in the sport. In 2006-07, the Miami senior synchronized skating team won second place in the sport’s world championship event, the highest finish ever for a group from the U.S.

The coaching tree started by Korn has expanded all across the country. Shoker said year in and year out, the majority of podium athletes in the sport are coached by former athletes who skated for Korn.

“Any team that has won in the collegiate division has had a Miami alumnus as a head coach,” Shoker said. “It’s very unusual for me as a current coach to come across an athlete who hasn’t been impacted by alumni (of Korn).”

Beyond the accolades for championships, it was Korn’s impact on people that Shoker will always remember. Shoker said Korn’s desire to influence lives came through during skating camps she would put on while coaching at Miami.

“Her camp wasn’t just to teach kids, but to make sure they felt engaged and felt at home at Miami,” Shoker said.

Korn is survived by her mother Thelma Fisher; her daughter Ashley, a current skating coach at the University of Michigan; and former husband, Mitch Korn, a former Miami hockey coach and a current NHL coach. Her family is planning to honor and remember her life at a later date.

Donations can be given in memory of Korn online to the US Figure Skating Synchronized Skating Athletic Support Fund, or by mail at U.S. Figure Skating, 20 First Street, Colorado Springs, CO 80906.