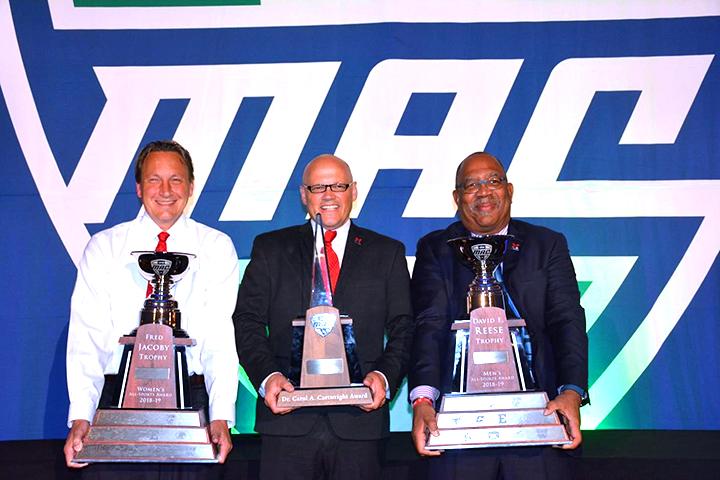 Even during the summer offseason, Miami University Athletics is winning trophies.

The RedHawks capped off a historic 2018-2019 year by finishing first in both the Reese and Jacoby standings— the men’s and women’s all-sport standings in the Mid-American Conference. It was the first time the school has topped both in the same year. It was only the fourth time a university in the MAC had won both in the same year.

The trophies, along with the Cartwright Award for for excellence in academics, athletics and citizenship, were presented at an MAC ceremony in Cleveland on Wednesday.

“I knew it was a really good year, and we all felt it in the (athletic) department,” Director of Athletics David Sayler said. “There was just kind of a sense of momentum, and the fall sports got that going. It’s just awesome to see and be a part of. We’re going to celebrate, this summer, together as a staff quite a bit.”

The total number of points is added up and divided by the number of teams. Whoever has the highest average wins. Non-conference games are not considered.

The men won the Reese Trophy for a league record 24th time—the first since 2004-2005. No other school has captured more than nine.

The women won the Jacoby Trophy for the sixth time and the first since 2012-2013.

There is no monetary prize for the Reese and Jacoby victors, but Sayler anticipates his coaches using the standings as recruiting tools.

“In recruiting, we’re going to tell all student-athletes coming to visit that we’ve got the best all-around athletic program in the league,” Sayler said. “I think we have the numbers to prove that now.”

With the dual victory, Sayler and Co. completed one of their main goals set when he took over as Athletic Director in 2012. That year, the women teams won the Jacoby Trophy with a first-place finish in the league, but the men finished 12th in the 12-team league.

Each year since, the women have remained near the top of the standings, finishing no lower than fourth since Sayler’s arrival, but the men have made a steady climb.

“There’s just been a continual momentum push, and I think it coincides with fundraising and some strategic planning with new coaches and new resources being available,” Sayler said. “We wanted to be more competitive on the men’s side and also continue the women’s success, which they’ve had for a long time. To get them to a point where they both got first, it just means a lot. It means a lot of people are doing some great stuff with great student-athletes and coaches and staff. That’s truly how I feel.”

Sayler hopes the success will continue in the future. He tells each of his coaches their teams should strive to finish in the top third of the league every season.

“It’ll obviously be tough to duplicate because a lot of things have to happen here and there to change the numbers a little bit,” Sayler said. “You might not win, but I expect us to be competitive every year for this.”

Sayler estimated each trophy weighs about 30 pounds. He drove home from Wednesday’s ceremony in Cleveland with them buckled up in the back seat of his car. They will be put on display in Millett Hall.