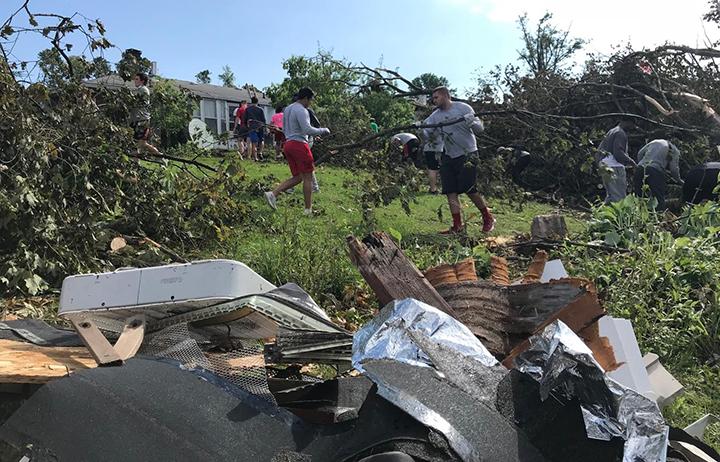 Miami football players are able to move heavy branches with a lot more ease than most people, cleanup supervisors noted on Friday. Photo by Chris Vinel

Ja’don Rucker-Furlow didn’t know why his mom was asking him if he was OK.

A sophomore cornerback on Miami University’s football team, Rucker-Furlow returned his mom’s text from Oxford on Monday night, telling her he was fine.

He didn’t find out about the 14 tornadoes that hit his native Dayton area until Tuesday morning.

“I saw it on social media, Facebook,” Rucker-Furlow said. “Once I saw everyone posting on Facebook, that’s when I called my whole family.”

Rucker-Furlow’s family lives in the Dayton area. A graduate of Belmont High School, he grew up in East Dayton—one of the areas hardest-hit by the storms. His mother had just recently moved near Huber Heights, so she and the rest of his family came out of the storms unscathed.

“It was really sad, because growing up here, we never had any type of natural disaster throughout this place,” Rucker-Furlow said Friday, as he stood in the storm-damaged area. “Then, seeing the place like this, it’s just different. It’s shocking to me.”

A few other people checked in on Rucker-Furlow and his family on Tuesday morning, including Miami’s Director of Football Operations, Matt Yoches.

“He just said, ‘Yeah, everyone’s good, but to be honest, I really want to go back there to help,’” Yoches said.

As part of Rucker-Furlow’s summer class and football schedule, he couldn’t leave Oxford earlier in the week, but he proposed the idea of the team doing a cleanup.

“I (told him), ‘Listen, we’ll put something together and find something,’” Yoches said. 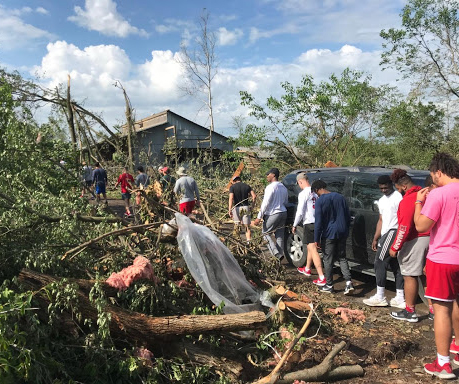 Yoches and other coaches reached out to landscaping and debris removal companies in Dayton and found 3n1 Tree Service.

After talking with Stu Moats, the owner of 3n1, the coaches decided to cancel Friday’s football workouts for the team to spend the day helping 3n1 and dozens of other volunteers clean up.

The players were not mandated to attend the clean-up, as the coaches made it completely voluntary.

Regardless, more than 40 players and coaches voluntarily drove an hour from Oxford to help. They started shortly before 10 a.m. on Graham Drive, just two streets over from Moats’ home on Darden Drive.

“I really appreciate this because they didn’t have to do this,” Rucker-Furlow said. “They could’ve stayed at home, but they all took the time to come out here and help out my hometown.”

Yoches said that about 20 RedHawks couldn’t join the efforts because of prior commitments, but that he thinks they were probably mad they were missing out.

Moats said he and his family have been living at his company’s office because his house currently has a tree through the roof.

“I’d say what we’re going to get done today is probably going to save us four days of work,” Moats said. “We’ll be four days ahead of schedule because of the athletes coming. The church volunteers, they do what they can, but we’re talking about a different physical ability with collegiate athletes here. What they can do in an hour is what other guys can’t do.”

The players and coaches were tasked with moving toppled trees and separating house debris from tree debris.

“I don’t know if you say it restores faith in humanity, but it’s easy to get jaded and see negativity,” Moats said. “But to see people you don’t know want to come and help, it’s uplifting.” Moats’ voice then trailed off. 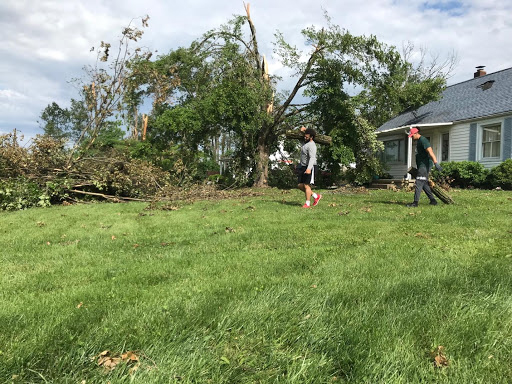 Redshirt sophomore offensive lineman Pete Nank said it was an easy decision for him and his teammates to support Rucker-Furlow and his home area.

Nank knows the devastation tornadoes can cause. As a native of Iowa, he’s participated in cleanups before.

“Me and my buddies who were in the car with me on the drive up today, what we were saying was, ‘It’s crazy how you get a mile out and there’s no damage at all,” Nank said. “So just how quickly a tornado hits the ground and gets out of here, like you can be a mile away and have nothing happen at all. But then you can go a couple streets down the block and see all this. It’s crazy.”

“I’ll be honest, it hurts,” Rucker-Furlow said. “It hurts to see it like this, to see families and their well-beings and everyone in the city is just down right now. We’re trying to bring something positive back.”