Almost 4,500 graduates gathered on the field at Yager Stadium as friends and families sat in the stands last Saturday at Miami’s 180th commencement. Photo by Chris Vinel.

Miami University awarded nearly 4,500 at the school’s 2019 spring commencement on Saturday, May 18.

It was a warm 86 degrees in Yager Stadium, where graduates and their families and friends gathered for Miami’s 180th commencement.

Commencement speaker Jeff Pegues, an Emmy Award winning justice and homeland security correspondent for CBS News and a 1992 Miami graduate, told the students that he thought of the stadium as his home.

Pegues played football at Miami and quickly realized his dream of making it to the National Football League would not come true after facing off against his much bigger, stronger and talented teammates.

He told those in attendance he didn’t know what he wanted to tell the graduating students.

“In fact, I was asked at lunch today, ‘Have you finished your speech?’” Pegues said. “And I said, ‘No, I haven’t.’ Because, honestly, when I get back onto this campus, all these ideas start flowing back at me. I love it here. After 27 years away, you think, ‘Can I stay?’”

He asked the graduating students, “Are you sure you want to leave?”

They erupted back at him, yelling “no” all at once.

A Chance Encounter Directed his Life

After joking about his enjoyment of the food on campus, Pegues told the story of how he became interested in television news.

He was walking around campus one day and saw a sign advertising for Miami’s television news channel auditions that day. He felt compelled to give it a try, and after he did, a professor told Pegues he had a future in the business.

Pegues told the graduating students, “You could be me.” He was an average student with no direction and no concrete post-Miami plans until he stumbled into those auditions.

He then gave them lessons to remember.

“First, in this current business environment, optimism, of course, creates the type of mindset that employers are really looking for,” Pegues said. “They want to see that you have grit.”

To land his first job, Pegues said he told the news director who eventually hired him that he’d be the best hire she ever made, and he’d work harder than everyone else.

“Lesson No. 2: You will face challenges,” Pegues said.

He said to stay grounded. 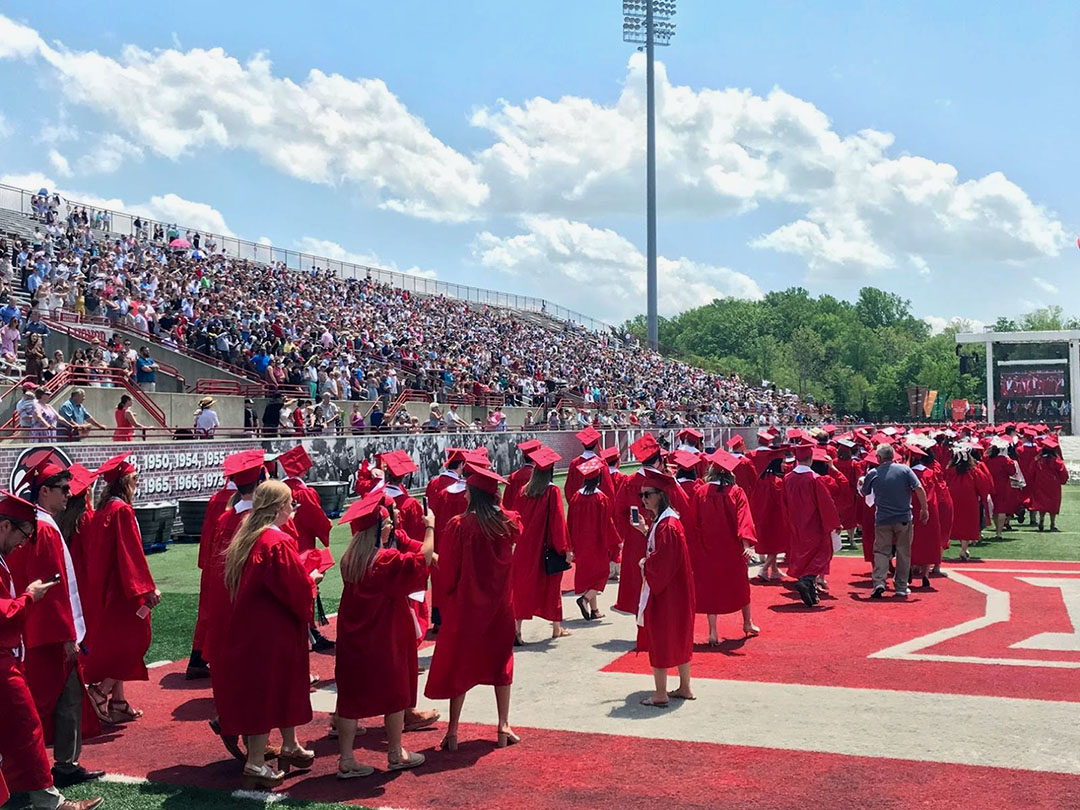 Red-gowned students walk onto the field as the graduation ceremonies begin. Photo by Chris Vinel.Take Stock of Who You Are

“Don’t forget to stop, take a look around, and take stock of who you are and why you’d made it to where you are,” Pegues said as his third lesson. “Sometimes, we get so busy, we forget all the blessings we have in our lives. But writing this speech made me realize what was important to me, who was important to me and why I’ve managed to succeed.”

Pegues’ last lesson referred back to his second.

“You will be challenged,” Pegues said. “How will you react? Will you push through it? And what are you willing to do to succeed? I always remember what [my head football coach at Miami, Randy Walker,] told us: ‘Winners do the little things the losers won’t do.”

Pegues finished his speech by wishing the graduating students good luck and saying “Love and Honor.”

After students from each college stood and were recognized, and the glee club sung the alma mater, the commencement ended.

However, the ceremony was only part of the excitement for the rest of Oxford.

“We try to make sure we have commencement on our community calendar as far out as possible, just so that people know to expect graduation,” Enjoy Oxford Communications Specialist Taylor Meredith said.

According to Meredith, all Oxford hotels were fully booked for the weekend.

“People make reservations for their hotels months and months in advance,” Meredith said.

Commencement week visitors often ask Enjoy Oxford about the new businesses that have popped up in town, Meredith said.

Meredith said Enjoy Oxford did not ramp up advertising but did congratulate graduates on social media and distributed “congratulations” window signs to local businesses.

For Oxford police officers, the week “could’ve been a lot worse,” according to Lieutenant Lara Fening.

“I thought it was calmer than we expected,” Fening said. “I was pretty pleased.”

Besides a couple brick-smashed windows in houses and cars, the weekend was relatively calm in terms of criminal activity.

Most of Oxford’s officers were needed to help direct traffic rather than deal with crime, she said.