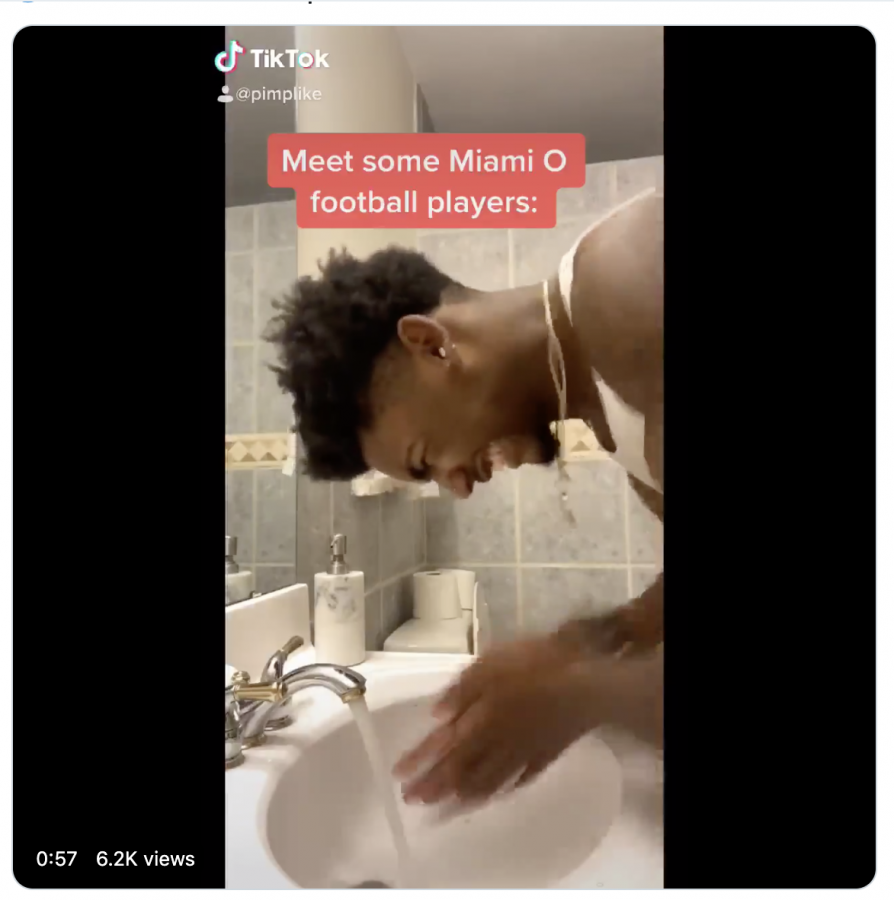 Deland McCullough, a freshman wide receiver edited a TikTok to the theme of \"Full House.\" Photo taken from Twitter.

Miami student-athletes, along with the RedHawk athletic department as a whole, are getting creative as they pass time spent at home in quarantine.

Typically, Miami athletes are some of the busiest people in Oxford with schedules packed full of workouts, classes, practice, film sessions and studying. Now, they are just idle as the rest of the country currently on lockdown due to COVID-19.

Much like the rest of the country, the RedHawks have looked to TikTok to cure their boredom at home. TikTok is a new app on smartphones where users typically post comedic and dancing homemade video productions.

Miami athletics has garnered social media attention on Twitter through their videos, including pieces coming from all Miami sports teams, the Miami field hockey team and the Miami football team.

In the video featuring multiple Miami programs, players from various teams hit, kicked or threw a ball/sport-specific object off the screen to a player from another Miami team. In the field hockey Tik Tok, the team uses modern edits to cut from player to player showing off medals and rings for championship achievements. The football team’s video features 10 players imitating the opening to the TV show “Full House.”

Miami sophomore field hockey player Kylie Herb saw trendy edits on TikTok and wanted to pull her team together to make a compilation.

“I wanted to make sure the whole team was involved,” Herb said. “Let’s show off our medals and all the hard work we’ve put in.”

Freshman wide receiver Deland McCullough of the RedHawk football team made the video, inspired by “Full House,” with the mission of presenting some of his goofy teammates with the opportunity to have fun in front of the camera.

Beyond making comical videos, finding ways to stay lighthearted during this time has been difficult. For McCullough, the main source of entertainment during quarantine is playing the video game “Call of Duty” virtually with teammates.

“My fun is very limited to the Xbox right now,” McCullough said. “I’ve never really been a gamer like that, so it was a big step for me to get the game. And now I’m addicted to playing it.”

While the football team has used video games to stay socially connected from their homes all across the country, Herb said the field hockey team is leaning on Zoom technology to remain plugged in with each other’s lives. Herb said the team chats over Zoom on a regular basis and will watch the same show on Netflix at the same time from their homes.

From a training standpoint, the virus has made working out difficult for Herb and the rest of the RedHawk field hockey team. They have resorted to using backpacks full of books as weights for training equipment.

For Herb, not having her teammates physically present during workouts makes quarantine even more taxing.

“Our team’s really big on communication and pushing each other,” Herb said. “To do them [workouts] alone is really hard because you don’t have those people behind you pushing you to go up those extra five pounds.”

McCullough said he is running out of options to stay productive at home. He and a few other student-athletes at one point were training at a nearby field, but McCullough said someone reported their activities after a police officer showed up one day to disperse the gathering.

While both having fun and staying in playing shape is a challenge for student-athletes, McCullough said he takes some comfort in the fact that others all around the world are going through the same thing.

“We’re not the only ones going through this,” McCullough said. “My struggles are somebody else’s struggles.”