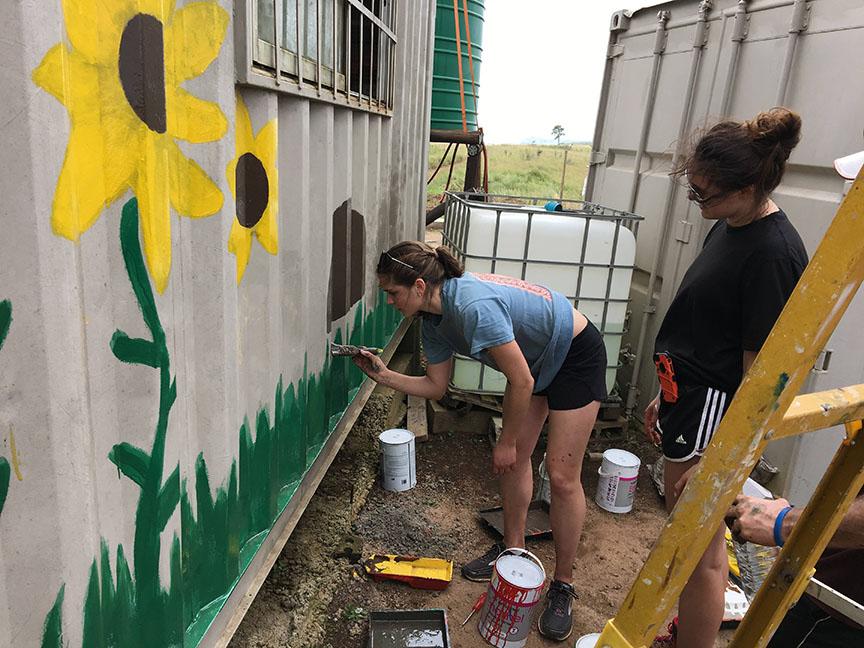 Crossroads volunteer Dani Stelzer (left) paints a mural on the outside of a shipping container turned into a pre-school, as Katie Coverdale (right) observes the mural as a whole. Photo provided by Katie Coverdale

For her spring break, Miami graduate student Katie Coverdale didn’t jet off to Florida’s beaches or the ski slopes of Colorado. Instead, she spent 36 hours on a flight across the world, traveling with 21 other students and local community members to Durban, South Africa.

Coverdale and her peers participated in a Go South Africa mission trip through Crossroads Oxford, staying in the city of Durban and venturing out to the countryside to interact with the impoverished community of Ndwedwe, a town in the KwaZulu Natal region. KwaZulu used to be a semi-independent homeland for the Zulu people until 1994 when it joined with the Natal province as part of the Republic of South Africa.

Ndwedwe, a rural farmland town, is about an hour outside of Durban. Animaesh Manglik, the ReachOut site director for Crossroads Oxford, said its residents “work the land and feed their families from the land they work on.”

Manglik helped organize the Go South Africa trip and explained that Crossroads chose South Africa because of its longstanding partnership with nonprofit organizations such as Build The Future.

“We always want to serve our partners and the people they’re serving,” Manglik said.

Build The Future is a foundation stationed in South Africa that provides impoverished, preschool-aged children with food and opportunities for education. They convert old shipping containers into preschools in areas that need more early childhood education facilities. While Crossroads has been working with Build The Future since the early 2000s, this was the Oxford group’s first trip to South Africa.

Crossroads is a nondenominational church with different sites throughout the Cincinnati and northern Kentucky region. Services take place in Benton Hall on High Street, but students spend time at the Outpost building, 406 E. Withrow St. Oxford, during the week.

“I’ve always wanted to serve in a bigger way,” Coverdale said. “I missed a lot of opportunities to go on summer [mission] trips in high school because of sports. I really wanted to re-find my faith.”

Last year, Coverdale traveled with Crossroads Oxford to Nicaragua for a spring break mission trip. Feeling “transformed” after her time in Nicaragua, Coverdale decided lead a small group of participants on this year’s trip.

In Nicaragua, they dug ditches and installed pipes to bring running water closer to the community. This year, the group from Crossroads also installed an irrigation system, but this time the water was directed to a garden connected to the school.

“They have a garden that they use to feed the kids when they come to school, and for some of them, that’s the only food they eat all day,” Coverdale said. “We put in an irrigation system, weeded everything, got everything out, put compost on top of it, and then we planted spinach and cabbage.”

By the time the Crossroads group arrived in Ndwedwe, Build The Future already had finished building the preschool out of a shipping container. While a small task force of the participants completed the irrigation system, the rest of the group helped paint the outside of the school. When that was finished, these members worked with the children and handed out food and books brought with them from Oxford.

“We put together food for the preschoolers to take home to their families, and we helped set up the library that they have with books and stuff that people actually donated from Crossroads,” Coverdale said. “The food that we donated, the books that we donated… it was really cool to not only have been a part of the food drive here but then literally have that food in South Africa and see it physically go to a specific child.”

Hyland Dill, a freshman at Miami, dedicated most of her time to play with the children at the school. Technically, the Ndwedwe children were on break that week, but they decided to come to school just to see the Crossroads people.

“I helped watch the kids a majority of the week, singing songs with them, things like that. My main goal was to show how much we cared for them,” Dill said. “Even if they don’t speak English, showing them in little ways how much you support them and care about them and want them to feel loved (matters).”

Dill was touched by the amount of love and joyfulness expressed by the children no matter their dire circumstances.

“It didn’t matter whether or not they had food on the table or toys to play with; they were always joyful and always finding reasons to be happy and singing and dancing.”

Sophomore Abbie Smith saw the lack of resources and living conditions in Ndwedwe and was reminded of Crossroads’ purpose for making the spring break trip. When she first had to use the bathroom, Smith noticed the urine on the floor, the cobwebs and dirt, the bugs scurrying to the corners and the lack of toilet paper. With no running water, the toilets didn’t flush.

“I had some expectations going into it in terms of how poor the area is. But when I got there, it was a lot heavier than I had anticipated,” Smith said. “It was a lot harder being in that actual atmosphere. We see stuff in media all the time about poor people and starving children, but seeing it in real life is really sad.”

Faced with the reality of this community’s standard of living, Smith was forced to address her conceptions about her life.

“Coming back, I’m seeing my daily life differently just because all the kids and people we met there were so happy but had so little. I find myself complaining every day about little things like being late or too much homework; everything here I take for granted.”

Being surrounded by these children and these people who found joy in the smallest things, Coverdale’s friend Alyssa Brooks pointed out that her Christian faith corresponds to that life philosophy.

Dill expressed a similar sentiment about her growing faith.

“I want to apply the kids’ joy that they have in small things, like being able to talk with a friend, or singing a song, or having fun. I want to constantly be thankful and constantly be in a posture of humility and gratitude.”

Seeing the irrigation system implemented and the preschool completed helped Dill realize the effects of their presence, and it reminded her never to doubt her ability to play a role in someone’s life.

“We just don’t realize the impact we’re going to have in five days, just in terms of what these people are getting from us. This guy who used to water plants by hand every single day, fill up his jug of war—and it would take hours and hours and hours—and now he just has to flip a switch. Now he has more time with his family, with his kids; people just don’t understand the future impact they could have on generations—how is this going to affect this guy’s grandchildren, his great-grandchildren?”

Dill, Smith, Coverdale and the others who traveled to South Africa with Crossroads left their impact on the town, but the town left its impact on them too.

“The last day that we were in the school in Ndwedwe … we gathered all the kids around, had them sit down, and we sang songs for them. At the very end, we taught them one of the songs, just five words: ‘Oh, how He loves us,’” Coverdale said. “We were all singing it together and just … goosebumps. We are from such completely different parts of the world, but we can be unified in music and in praising Him, which was an astounding moment and something I will take with me forever.”