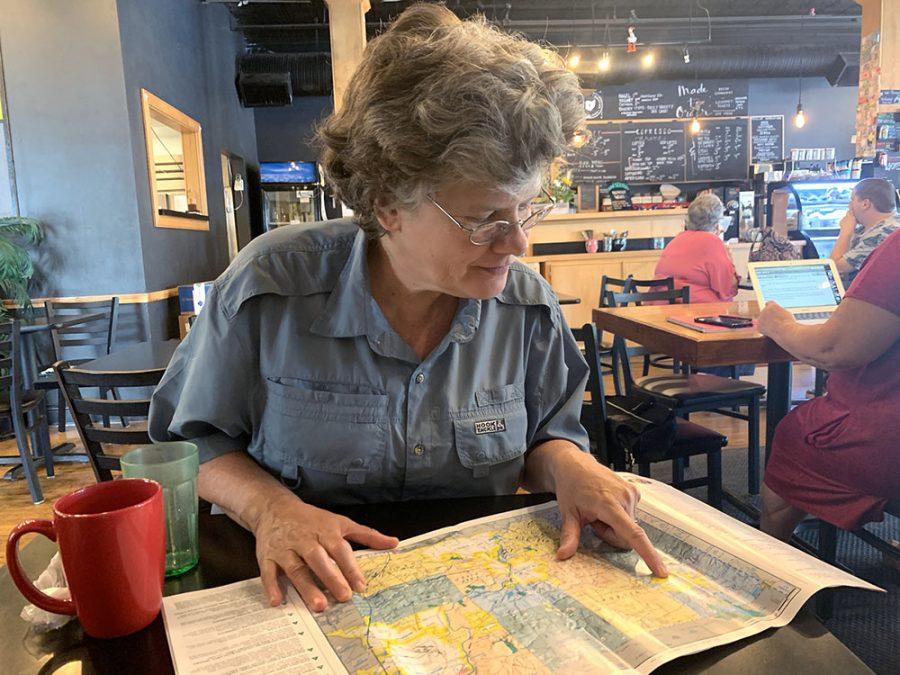 Mayor Kate Rousmaniere goes over a map of Butler County, during a recent interview in the Kofeyna coffee shop on High Street. Photo by Ryan McSheffrey

Oxford Mayor Kate Rousmaniere—or “Mayor Kate” as she likes to be called, is nearing the end of her four years as the city’s elected leader. She said people often overestimate how much power the position comes with in Oxford.

She points to the structure of the Oxford’s government, in which city council manages the employment of a city manager to oversee the city administration, as a reason for that.

“The (mayor’s) job is sort of a public face, you open ribbons and show up,” Rousmaniere said.

Friend and fellow councilor, Edna Southard concurred with the assessment.

“We have a city manager form of government, which means the city manager is in charge of how the city operates,” Southard said. “It’s a good form of government, because it means that professional people that can devote full time to the work, are running day-to-day operations, while elected councilors can talk with the people about their problems.”

Rousmaniere has come to grips with the limitations.

Rousmaniere’s term as mayor—a job she was tapped for by her peers on city council, as the City of Oxford charter prescribes—ends this year. She is term-limited from seeking re-election to council in November. However, in January, barring unforeseen circumstances, Rousmaniere will become an Oxford Township trustee, as she is running unopposed for that position on Nov. 5.

“I thought, ‘I really like local government and the city and the township, and I’d like to stay involved,’ ” she said.

She’ll be replacing trustee John Kinne, who chose not to seek re-election. She will be one of three elected trustees on the township board, who along with the elected fiscal officer, run the township government. Like the Oxford city council, township trustees in Ohio run in non-partisan races, with no political party designations on the ballot.

“Those four people meet around the table and talk about what’s going on,” Rousmaniere said of the township’s public meetings.

“The main issues I’ve seen (in the township) have to do with primarily infrastructure, like roads, piping, EMS and fire, but they have their own small police force, so I’d say infrastructure and safety are the main things,” she said.

A friend nudged her into local politics

Rousmaniere moved to Oxford in 1993, and is entering her 27th year as a professor of educational leadership at Miami.

She grew up on Long Island, and came out to Ohio to attend Oberlin College. After graduating, Rousmaniere moved back to New York and taught high school while pursuing her doctorate degree at Columbia University.

She first became interested in local politics in 2011, when former mayor Prue Dana gave her a nudge in the right direction.

“I was scared to run for office, but it wasn’t actually as scary as I thought, when I did it.”

Rousmaniere was thrown into the fire, “learning who does what, and how we can learn together to make decisions, how budgets work, how ordinances happen, Robert’s Rules of Order, how the commissions work, what people do on the city staff,” Southard said.

“I remember when she first got on council, she was somewhat quiet,” said Doug Elliott, Oxford’s city manager. “And as she learned more, she got more involved.”

“You’ve got to learn a lot of new stuff,” Rousmaniere said, in describing her initial term on council.

After she learned the ropes, Rousmaniere won re-election to council in an unopposed 2015 contest. At that point, she threw her hat in the ring for the mayor’s position, which is selected in a vote by councilors every two years. Her colleagues gave her the job and reappointed her two years later.

According to her, some things change subtly when you become mayor.

“When I became mayor, people in the city staff said, ‘OK, she wants bike lanes, let’s take care of this,'” Rousmaniere said.

“Not every problem has a legislative solution, some problems, you just keep talking about them, and people say, ‘we can make that happen without too much extra costs,'” she said.

A familiar and physical presence around town

Rousmaniere said she likes to ride her bicycle, and is a member of the Coalition for Healthy Living in Oxford.

“She bikes around town, goes over to the university, and goes to meetings on her bike,” Elliott said. “Not everybody takes the time to ride a bike, we’re all in our cars with our busy schedules. She promotes physical activity with her example.”

Physical activity is at the heart of another major project which begun during Rousmaniere’s tenure with the city—the Oxford Area Trails System (OATS) project that eventually will encircle Oxford. 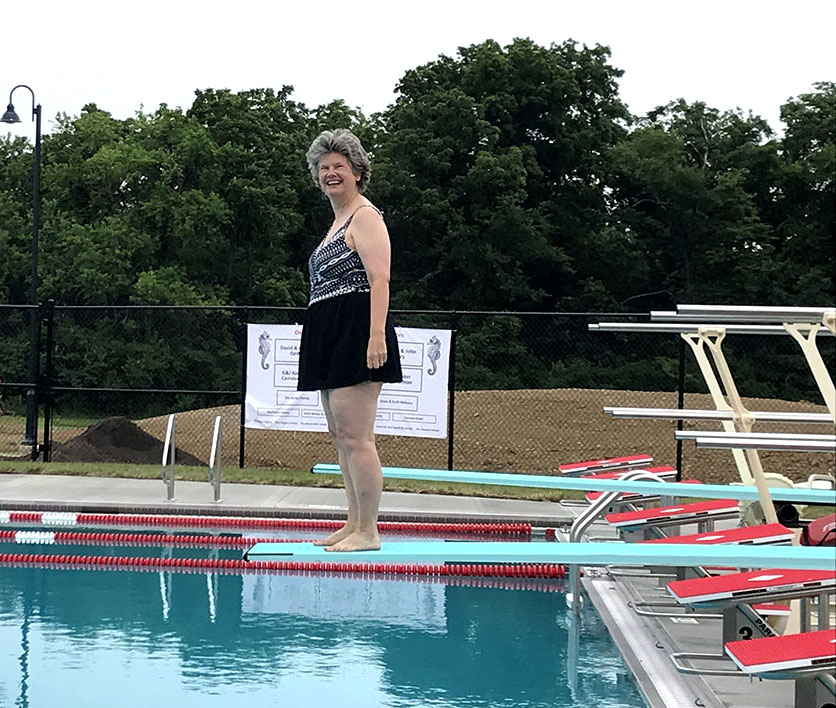 Mayor Kate inaugurated Oxford’s new city pool with a cannonball off the diving board on its opening day this past June. Oxford Observer file photo

And while she is only one among seven councilors, a lot of other things have happened during Rousmaniere’s time as mayor.

“Over the last several years, we’ve completed both the Municipal Building and the police station, and the Aquatic Center, and she’s done a good job of leading the council and guiding them,” Elliott said.

Rousmaniere says the nickname “Mayor Kate” is a carryover from having students call her “Professor Kate” because of her oft-mispronounced last name. She pronounces it “ROO-ma-neer,” leaving the “s” silent. Going by the more familiar title is an example of what has been her down-to-earth approach toward the position.

“She cannonballed into the pool for the grand opening of the Aquatic Center,” Elliott said. “She has a certain, shall we say, playfulness about her, as far as leading the city.”

But being friendly should not be taken as a lack of seriousness about the job.

“She might seem a little casual, but she’s very professional in going about her duties,” Elliott said.

“She has her own style, and that style is one that is more casual—she’s not pompous, but that does not mean she’s easy-going or does not work hard,” Southard said. “I think she has a lot of common sense, which is great. Listening and common sense are some of the things that make for a good council.”

Rousmaniere said she doesn’t know if she’ll run for council again someday, as she’ll be allowed to do after taking the mandated break between pairs of elected terms.

“I’ve been here for eight years, let other people have a stab at it, it’s not necessarily in my forecast,” she said. “For all I know, I might love (the township board of trustees) and stay on it for many years.”

Although Mayor Kate will soon become Trustee Kate, Southard is happy her friend will stay involved with local government.

“I’ll miss her on council, but I know she’s going to be a good trustee in the township,” she said.