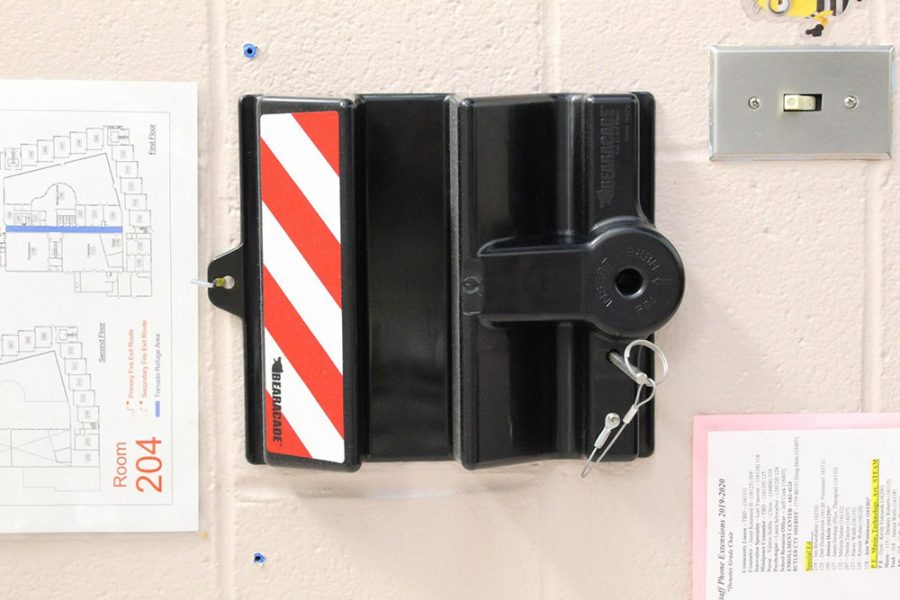 A Bearacade door stop hangs on the wall of a Lakota classroom. Photo provided by Betsy Fuller

New safety measures have been implemented at local schools, and two months into the school year, such measures are now just part of the routine for students and staff. While routine, such actions are also primary concerns for many parents due to the number of mass shootings the country has seen in the past year.

The Gun Violence Archive is a database of stats collected from over 6,500 law enforcement, media, government, and commercial sources. It has recorded a total number of 325 mass shootings this year alone. For a little perspective, there have been more mass shootings than days in the current year as of Oct. 8, which is the 284th day of 2019. Of those 325, there have been 61 of these incidents on school grounds.

Due to such a high case number, it was cause for concern for many parents as the new school year approached. Butler County made it a point to implement new protocols this year that would help keep students safe.

Lakota School District has jumped ahead of the game and has installed hundreds of “Bearacade” doorstops in their classrooms. These doorstops are designed to secure doors and stop active shooters or other violent threats from entering classrooms.

In the event of an emergency, teachers are supposed to grab the Bearacade from a wall hook and place it on the door, where it will then deploy in five to eight seconds. This is only the latest addition of security measures Lakota has done to increase safety in their schools.

Recently that district hired more school resource officers, allowing for there to be an officer at each school.

“Our plans are never complete,” said the Superintendent of Lakota Schools Matthew Miller. “We are always working with our law enforcement partners to evaluate our safety measures in order to improve,”

Talawanda School District, which already has one police officer per school, also has added new security measures to protect students this year.

“It is disturbing to me as a parent that we have to think of such awful things,” said Tana Richards, a mother who has children within the Talawanda district.

Over the summer, the district upgraded its cameras, added black-out window covers for classrooms, new entry and exit card readers, and emergency first aid kits for all buildings, all of which have been added in the past year.

The school district also employs School Resource Officers who serve at the school all day while the children are there. These officers go through intense 40-hour training that gets them ready for the upcoming school year.

In the cases of all active shooter situations, these officers are instructed to respond to the threat directly to try and neutralize the situation. “We’re always taught to go towards the threat, and getting to that threat as quickly as possible is always our priority.” said Lt. Lara Fening of the Oxford Police.

With the concern for students being so high, many parents want to make sure their kids are safe and know what to do in the cases of emergencies.

“I do speak with my children about active shooter drills, and they all seem to feel knowledgeable,” said Richards.

Whether or not to utilize the doorstops has been a question brought up in the district. But there has been widespread controversy about them. Not all safety experts agree upon their use, so, for the time being, they will not be placed in any Talawanda schools.

“I believe my children are more or less safe,” said Jessica Stoyko, a student at Miami University and mother of children in the Talawanda school district.  “I think schools can do as much as they want, and practice is great, but a domestic terrorist will watch for patterns and figure out how to get in regardless.”

In addition to the summer renovations, Talawanda has already participated in a multi-school safety drill this June that involved an outdoor sporting event, a hostage/active shooter scenario, and they tested their emergency communication protocols and systems.

“TSD performed very well and was prepared for the exercise,” said Morrish.

The school district is still in the process of updating its safety protocols for the state.