Local Christians Start Their Annual Tradition of Lent, A Forty-Day Period of Prayer and Reflection 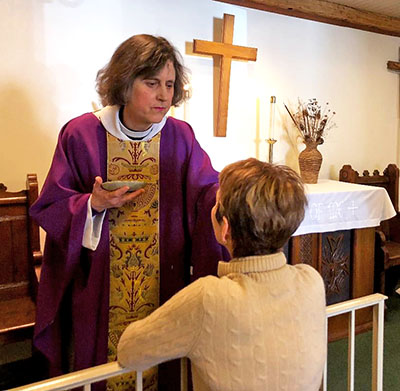 People squeezed into pews, stretched up and down the aisles and crammed into the front entrance like cattle. Shoulder to shoulder and knee to knee, about 400 parishioners jostled for space in the crowded sanctuary of St. Mary Catholic Church.

Miami students and Oxford community members gathered together at 5:30 p.m. on Wednesday, Mar. 6, to celebrate the upcoming Lenten season which began with Ash Wednesday.

Lent is a forty-day period of prayer and reflection in the Christian tradition, when parishioners take time to contemplate and focus on their relationship with God. Several denominations also draw attention to their mortality as the 40 days lead up to Good Friday; the day when Jesus Christ sacrificed himself on the cross to absolve people of their sins.

Ash Wednesday opens the Lenten season with a reminder to Christians that “for dust you are and to dust you will return,” according to Genesis 3:19. Congregation members are marked with the sign of the cross on their forehead in ashes as an external remembrance of our mortality.

In Oxford, a variety of churches and congregations choose to celebrate or not celebrate Lent in different formats. As the only Catholic church in Oxford, St. Mary is responsible for receiving numerous Catholic practitioners.

“I consider myself Catholic, but I don’t normally come to church,” Lindsay Cook, a freshman at Miami University, said. Cook decided to revisit her faith for Ash Wednesday and the upcoming Lent season. She concluded, “It means to me a time of waiting and restraining from vices and things we tend to indulge in.” 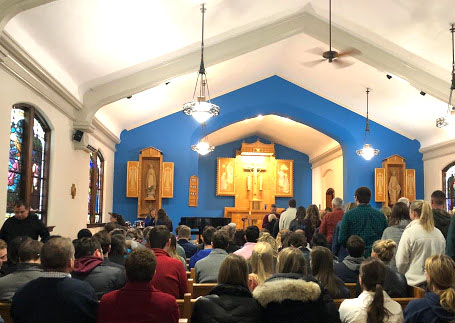 Catholic parishioners line up to receive the ashes on their forehead from Father Jeff Silver and others at the Ash Wednesday service on March 6. Photo by Leanne Stahulak

“It’s 40 days of penance and prayer, an examination of living and bringing ourselves better into harmony with the promises of our baptism and the life we’re called to in Christ,” he said. He also mentioned “additional opportunities for three disciplines [of worship]: prayer, fasting and alms giving.”

During the Ash Wednesday service, Father Silver’s message reiterated the lesson from chapter six in the Book of Matthew, which cautions Christians not to boast about praying, fasting and alms giving.

“Be careful not to perform your righteous acts before men to be seen by them,” the verse reads. “If you do, you will have no reward from your father in heaven.”

This Gospel lesson appeared in several other Ash Wednesday services, but Reverend Sara Palmer at Holy Trinity Episcopal Church emphasized how this philosophy should be used to foster a deeper relationship with God.

As a way to devote themselves more to God, Holy Trinity Episcopal Church will hold evening prayers every day in St. Bede Chapel at 5:15 p.m. during the Lenten season. St. Bede Chapel is open 24/7.

Thinking of Sacrifice and Renewal

Holy Trinity also hosts two Ash Wednesday services, where parishioners meet for quieter, more solemn worship. Around 20 members of the congregation met for the 12:15 p.m. service at Holy Trinity on March 6, filling the eight or so pews in the tiny chapel to the brim.

In her message, Reverend Palmer spoke about our mortality on this Earth, and how Ash Wednesday and the Lenten season are reminders to be more grateful and perceptive of the little things that matter in life.

“The emphasis on our mortality is to help us live more positively —  positively in the sense of drawing closer to God and allowing Him to open our hearts. So, for me it’s not about beating ourselves up and condemning ourselves; it’s more about allowing God to fill us and remind us of our purpose in this life that’s limited.”

For Holy Trinity member, Ellen Reister, as she’s grown in her faith, God has invited her to “take something on” instead of sacrificing something for Lent.

“To me, the real focus of Lent is to try to take on something or give something up … where if I do this it will bring me closer to God,” Reverend van Bulck said. “We enter a forty-day season for reflection and introspection, spiritual practice and disciplines, to try to redirect and reorient our lives in the direction we feel like God is calling us to.”

Oxford Presbyterian also hosts Ash Wednesday services, but their Lenten celebration begins the day before, on Shrove (Fat) Tuesday. Shrove Tuesday is a gathering that occurs the day before Ash Wednesday, as people feast and celebrate together before entering a season known for solemnity and fasting. Congregation member, Amy Bartel, even mentioned how Fat Tuesday is used “to clean the fat out of the kitchen.”

“It’s a physical way to prepare for a time that is reflective and sometimes also marked with physical sacrifice,” Bartel said. “It’s just contrasting those two parts of living, the time of excess with the time of sacrifice, and it just makes it … less abstract to do it in a physical way.”

Bartel, along with Mary Shinn, helped organize the Fat Tuesday Pancake Dinner that Oxford Presbyterian hosted. In addition to celebrating the coming of Lent, the dinner was also used as a fundraiser for the church youth to attend a Presbyterian Triduum at Purdue University. A triduum is a three-day religious observance lasting from Maundy Thursday to Easter Sunday. 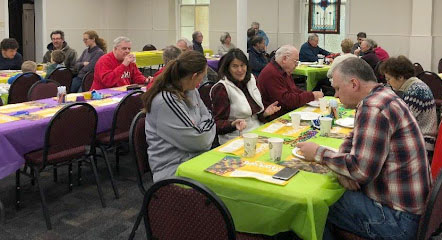 Members of the Oxford Presbyterian Church talk and celebrate Fat Tuesday together at their annual Pancake Dinner. Photo by Leanne Stahulak

While the Pancake Dinner featured colorful decorations and Mardi Gras beads, the Soup Dinner that took place on Wednesday night had a more solemn and simplistic air.

“(At) the Fat Tuesday Pancake Dinner, things are sweet and don’t have a lot of substance, and you try to get rid of those items in our homes that aren’t filling,” Pastor Lawrence Bartel, lead pastor at Oxford Presbyterian, said. “Now, tonight, we return to fruit, soup and bread.”

During the Soup Dinner, Pastor Bartel referenced the palms that were burned to create the ashes for Wednesday night’s service.

Thinking of How We Touch the World

“Just as those palms flourished for a season, they so quickly become ash. And yet those palms impacted the world, whether by giving us clean air, giving someone a job growing food,” Pastor Bartel said. “While they were alive they touched this world, but they return to death.”

“As we are alive with this gift of life, it’s my prayer and my hope that we are touching this world in a positive way. (But) that will come to an end at some point.”

Contemplating their impact on the world came up in conversations with parishioners of both Oxford Presbyterian Church and Holy Trinity Episcopal Church. Thinking about climate change and humans’ effects on the planet is an issue a few women in Oxford are integrating into their Lenten practices this year.

Oxford Presbyterian member Carla Blackmar works every day to incorporate less fossil fuel into her daily life, and she sees the Lenten season as an extension of that effort.

Oxford Presbyterian is hosting a series of Lenten Study classes every Sunday for the season, and Blackmar will be a presenter for one of them. She’ll discuss “reconnecting with nature” and how people can lessen their global impact by cutting out determinants such as fossil fuels.

Lisa Herrmann with Holy Trinity is taking a similar approach, but with plastic.

“I’m gonna work on … not having any plastic water bottles, think about my plastic use,” Herrmann said. “It will probably be a challenge on a few days, but I’m gonna try that, because I can make a new habit.”

Revered van Bulck at Oxford Presbyterian even referenced a passage from chapter two of Genesis that precedes the scripture pertaining to Ash Wednesday.

While these three churches place a heavy emphasis on Lent, other denominations within Oxford don’t actively practice it. At Oxford Baptist Church, Pastor Rudy Allen stressed that congregation members, if they choose to participate, embody the principles outlined in Matthew about not boasting about doing good deeds.“When we fast, we fast privately. We don’t let anyone know,” Pastor Allen said. “We feel it’s a private matter between the individual and God.”

He said that some parishioners at Oxford Baptist do partake in Lenten practices, but it isn’t advertised outright. Yvonne Vanbibber, Director for Connections and Women’s Ministry at Oxford Bible Fellowship, expressed a similar notion.

“We are firm participants in Good Friday and Easter, but I believe Lent is a personal choice,” Vanbibber said. “If you wish to give something up, it just depends.”

For those who do wish to partake in Lent, the churches in Oxford provide a multitude of options and resources for spiritual practice. Oxford Presbyterian is holding Lenten Study classes every Sunday from 11:30 a.m. – 1 p.m. at their Seminary Church building. Holy Trinity Episcopal Church offers evening prayers every day at 5:15 p.m. in the St. Bede Chapel. St. Mary Catholic Church, while not hosting any fish frys of its own, recommends the Friday Fish Fry at Queen of Peace Catholic Church in Millville, OH, on Friday, March 8.

“What is the purpose of these old, dusty rituals?” Pastor van Bulck asked at the Soup Dinner on Wednesday night. He answered his own question. “It’s meant to redirect and transform our lives in a way that glorifies God.”