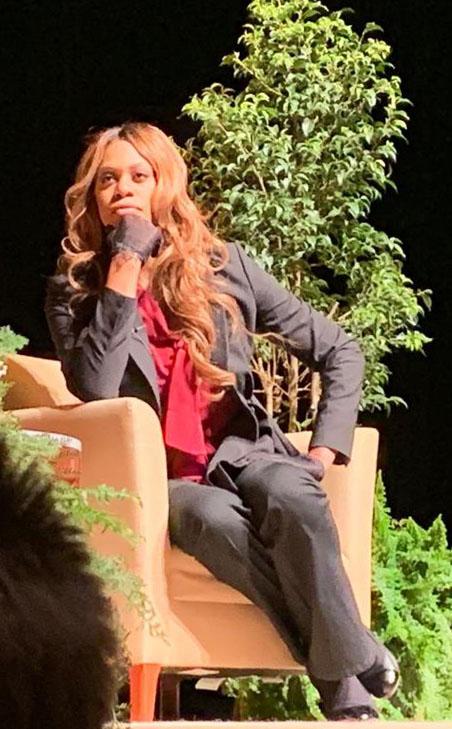 Cox listens to a question from an audience member in Hall Auditorium on Thursday. Photo by Josiah Collins

Laverne Cox, the first openly transgender person to be nominated for an Emmy award,  has become an influential LGBTQ+ figure and when she talks, people listen. Miami University was no different as a sold-out crowd filled Hall Auditorium, Thursday night, April 4, to hear her speak.

As soon as she came out she was met with applause and cheers and people immediately were engaged. Cox’s speech focused on her life’s story and her own journey into becoming the woman the world knows her as today. Her Emmy nomination came for her role in “Orange is the New Black.”

Cox began her speech by mentioning all of the various identities she holds and reminded the audience that “I’m not just one thing and neither are you.” She moved into telling her story and talked about her early childhood and the struggles she faced when dealing with her own nonconforming tendencies.

When she was younger, Cox faced scrutiny because she was not yet able to be confident in who she was. With the shame she felt, Cox attempted taking her own life.

According to the latest data from various studies, about 40% of transgender individuals reported attempting suicide at some point in their life, in addition to that 75% of transgender youth in grades K-12 feel unsafe at school.

Over time Cox grew more comfortable with herself and realized that the misconceptions she had about herself, and the transgender community were wrong. This was due to her getting to know people in the community and becoming more accepting of them and most importantly herself.

All of Cox’s life experiences led her to be the woman she is today. “I don’t wish anything happened differently in my life, everything that has happened to me is a blessing,” said Cox.

Cox stated that the best way for everyone to get over their misconceptions and prejudices is to get to know people who are different from us because we will then see that we are not so different.

Finally, Cox ended her speech by reminding the audience that you “have to give yourself permission to be imperfect,” and then you will be able to become your true self.