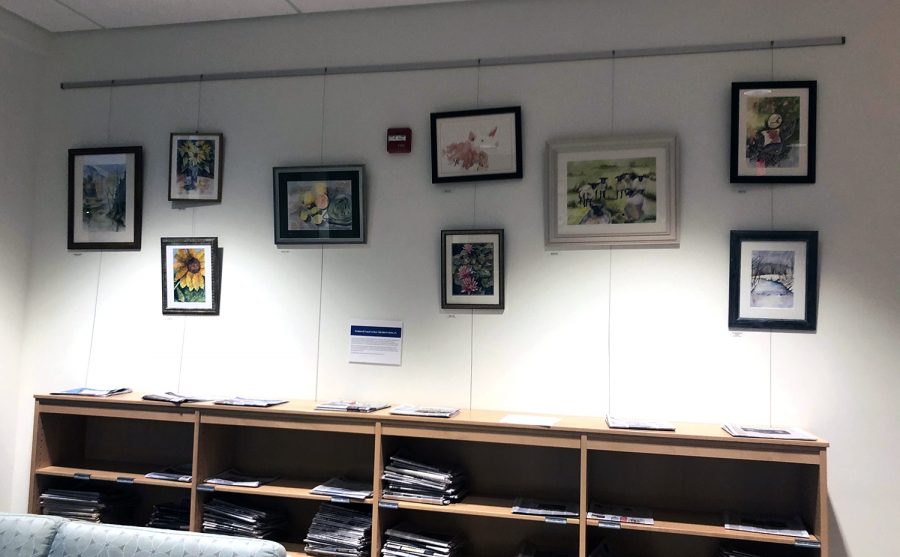 The art exhibition section of the Oxford Lane Library opened this week with a display of watercolors by local artist Sharon Bogan. Photo by Peyton Gigante

Up for three months, Bogan’s paintings will be on display until February. The exhibition space is on the second floor of the library, 441 S. Locust St. It’s tucked in next to the newspaper nook. The library hopes to use the art displays to enhance the experience of visitors while promoting talented individuals in the community, said Rebecca Smith, regional manager of the library.

A member of the “Friends of the Lane Library,” and the library’s “Third Thursday Book Club,” Bogan started painting just six years ago. What began as something she had always wanted to try, turned into something much more.

A love for color, specifically watercolors, Bogan’s eight pieces at the library showcased her talent for being able to appreciate the technique.

“The art of watercolor and the technique is so complex,” said Bogan. “It takes a lot of practice and effort, and I’m certainly not that talented and skilled, but I enjoy it.”

But Smith thought otherwise. After seeing an exhibit of Bogan’s work at the Knolls last year, she pitched the idea of staging exhibits at the library to members of the Third Thursday Book Club.

“I knew she (Bogan) liked to paint and had recently done an exhibit at the Knolls,” said Smith. “I thought it was inspiring that she didn’t have a formal art background but pursued her dream of learning to express herself and ideas through watercolors.”

And so, the two women got to work on getting space and the pieces ready for the exhibit.

“I was really grateful that Rebecca asked me to show my art at the library as the first person,” said Bogan. “I’ve been taking lessons from Jean Vance (at Oxford Community Arts Center), and always wanted to paint watercolors.”

After inching closer to retirement and quitting her job at a non-profit agency to stay at home, Bogan decided that painting was what she wanted to do. Going back and forth from Oxford to a second home in Pawleys Island, South Carolina, Bogan wanted to find the time to do what she loved.

“I have two degrees from Miami, a bachelor of arts in psychology and a master’s in family and child studies, and was a director of a non-profit agency for many years, said Bogan. “I worked as a social worker before that, so I had never had the time to sit down and have the time to paint.”

Bogan’s love for the Lane Library, both in Oxford, and her local library in South Carolina, was just one of the reasons she wanted to contribute to the art exhibit. A member of the Friends, and an avid participant in the book club, she first held herself accountable by painting something that went along with the book being discussed.

“It kept me painting,” said Bogan. She has since joined some watercolor societies in South Carolina, as well.

Her paintings in the exhibit vary in style. 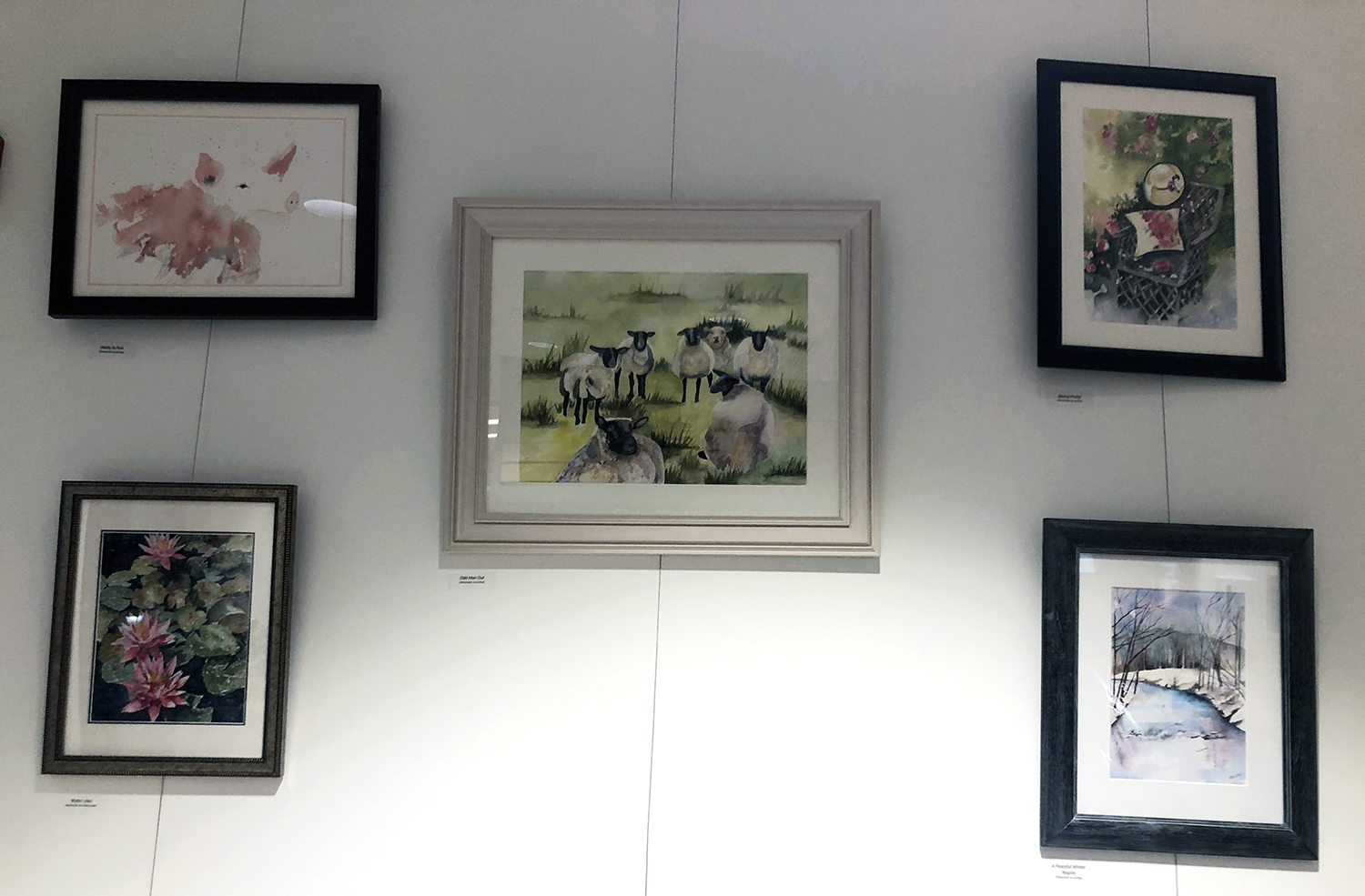 Bogan’s paintings will be on display through February. Photo by Peyton Gigante

“They’re all different,” she said. “I really haven’t found a style where someone can look at my style and be like ‘Oh that’s Sharon’s painting!'”

But regardless, they’re all exquisite. Bogan’s talent is evident and is precisely what the Lane Library wants all visitors to see when they see the exhibit.

“At the library, we want to celebrate the arts, especially local artists,” said Smith. “I think that displaying their work is the best way to appreciate their talents.”

Bogan doesn’t quite have a favorite painting, but she knows of one that most people say they particularly like when they see it.

“There’s a painting of a pig,” said Bogan. “It’s not my favorite, but everyone who sees it loves the pig!”

What’s next for Bogan? She wants to get established in Pawleys Island and keep painting to further advance her craft. But, not just in watercolor.

“I want to learn other mediums of painting,” said Brogan. “There are different types of techniques with different forms. I’m still learning and trying different methods, like acrylics, though most of my paintings are done with watercolors.”

Her paintings featured in the exhibit were all done over the last two years, with a few breaks in between.

“They’re mostly ones I’ve done within the last two years. With anything, you reach a plateau,” said Brogan. “So, I’d get to one level and then just thought I’d never get better. Some are from a couple years ago, some are more recent, and I can definitely tell the difference.”

Bogan’s installation and the art exhibit, in general, is just one more way that the Lane Library is trying to increase its community involvement, Smith said.

“These displays will also serve as an opportunity to connect with each other, learn, and discover through a shared art experience,” said Smith.

And, on sale, until its conclusion in February, prices will be available through both Rebecca Smith at the library, or Sharon Bogan herself, at [email protected]