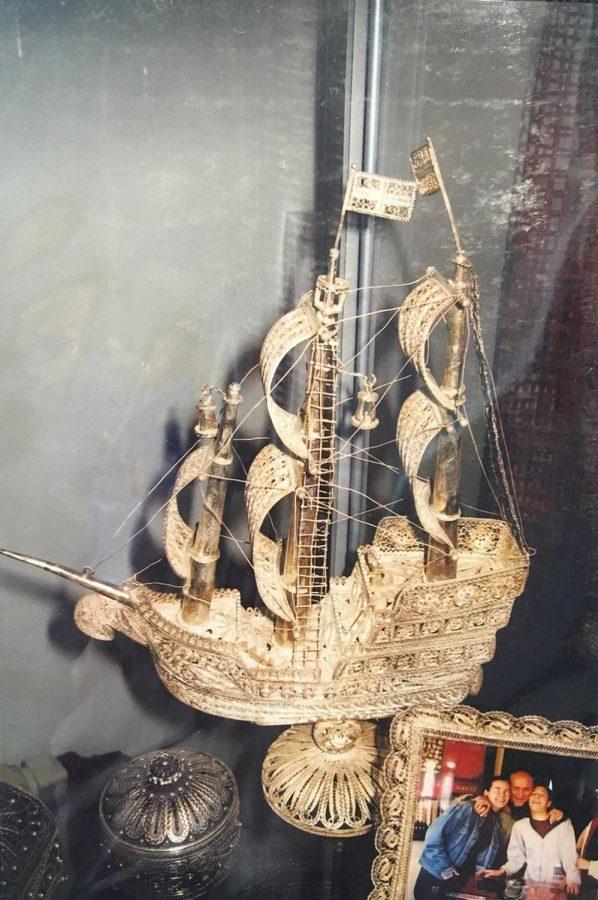 This silver ship, created with traditional filigree techniques was created by Skender Rakovica, now located in the home of a customer in France. This scale of work typically takes months to complete. Photo courtesy of Krenare Rakovica

PRISTINA, KOSOVO — Krenare Rakovica is one of the last of her kind. Silversmithing and the art of filigree, common in the Balkans for centuries, is being reduced to a tourist attraction rather than a staple of the area’s culture.

Rakovica, 34, mostly taught herself the trade through trial and error and did so because of her father, who served as both an inspiration and an obstacle.

Krenare followed her father’s footsteps since birth. Baby pictures show Krenare at her father’s side as he worked on his latest piece for their family-owned store in Pristina, the capital of Kosovo, a country in southeastern Europe that declared its independence from Serbia in 2008.

Krenare’s father, Skender Rakovica, opened his filigree shop near the old part of the city in 1983—one year after Krenare was born. Krenare remembers that as a child she knew she wanted to work with her hands, but not necessarily to use them as a silversmith.

Early on, the store was playfully named Kinez for Skender’s nickname growing up, meaning “Chinese” in Albanian. The name stuck with Skender into adulthood. The store would later be renamed for the family’s surname and would continue under that moniker until the shop closed in 2016, due to changes in Pristina’s economic centers as the city continued to rebuild and expand after the Kosovo War of the late 1990s.

Picking up the skills of an ancient craft

Krenare recalled stories of her father passing by storefront windows and being amazed at the intricate jewelry that hovered behind the glass, so much so that he decided to pick up the craft for a living.

“It’s a little bit late,” Krenare said. “Usually you learned it from the family earlier, not at that age.”

But age did not stop Skender from pursuing the passion he found in filigree.

The Balkan regions are popular locations for metalsmiths, as they were geographically well-situated for trade and placed near mines that at one time produced one-third of all silver in Europe.

Ilirjana Rakovica, Krenare’s mother, also grew up around silversmiths. Ilirjana’s father had been a Montenegro silversmith for 10 years. Her aunt’s family worked in the business while living in Pula, Croatia, but learned the trade in Prizren, Kosovo—a city where filigree has a deeper historical presence. Prizren’s filigree museum will open in 2021. 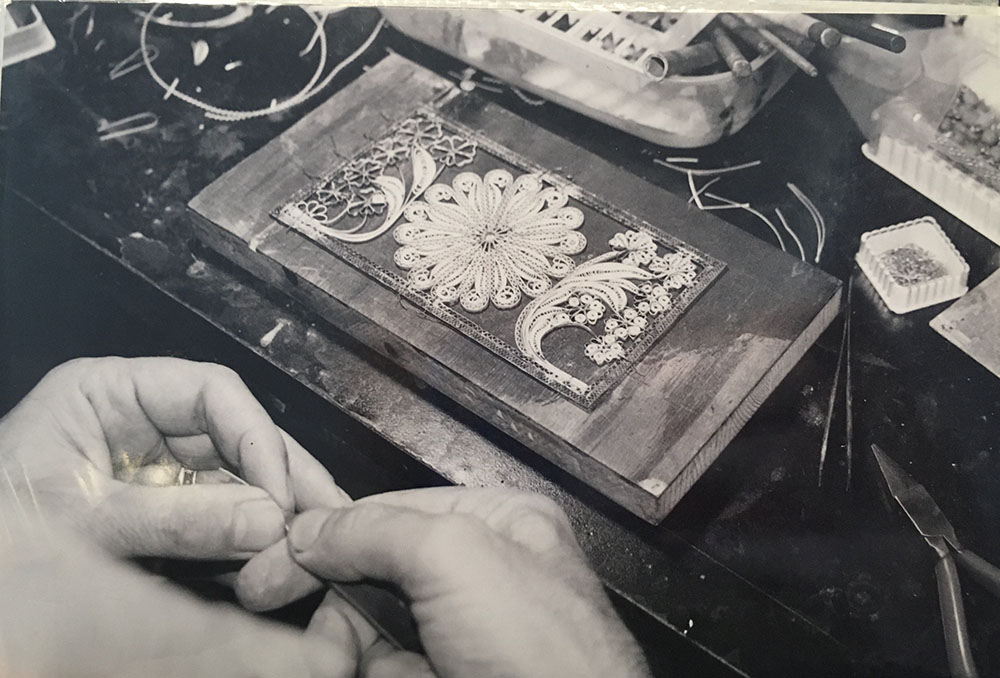 Skender Rakovica, Krenare’s father, works on a filigree box. Photo courtesy of Krenare RakovicaFiligree – a craft that is an art form

Filigree is a labor-intensive art form that requires steady streams of intense flames powered by the worker as they blow through a rubber tube. This process of delicate soldering adheres the precise and painstakingly-small strands of hair-like metal together to create finished filigree products.

The craft was originally a show of wealth, adorning everyday objects such as buttons and smoking pipes dating back to the fifth century. Today, filigree is more commonly seen in jewelry form: rings, necklaces, bracelets, broaches—products that cover the walls in Krenare’s present-day shop.

The small store under Rruga Garibaldi Street, only blocks from the city’s famous Newborn sign, a monument erected in 2008 to celebrate Kosovo’s independence. The shop is packed with Krenare’s pieces along with a few of her father’s as well. Krenare recalled her father’s steady hands assembling these pieces. He constructed anything from small boxes to miniature pianos, all built from spaghetti-thin strands of silver.

Skender and his family were forced to leave the store in 1999. The pressure of the Kosovo War had hit Pristina and the danger for the Albanian community reached its height. To evade Serbian forces eradicating ethnic Albanians from the disputed area of Kosovo, they became refugees in Macedonia for almost three months.

When the family of five returned, the store was empty, completely devoid of any indication that the room was once filled with precious silver works. 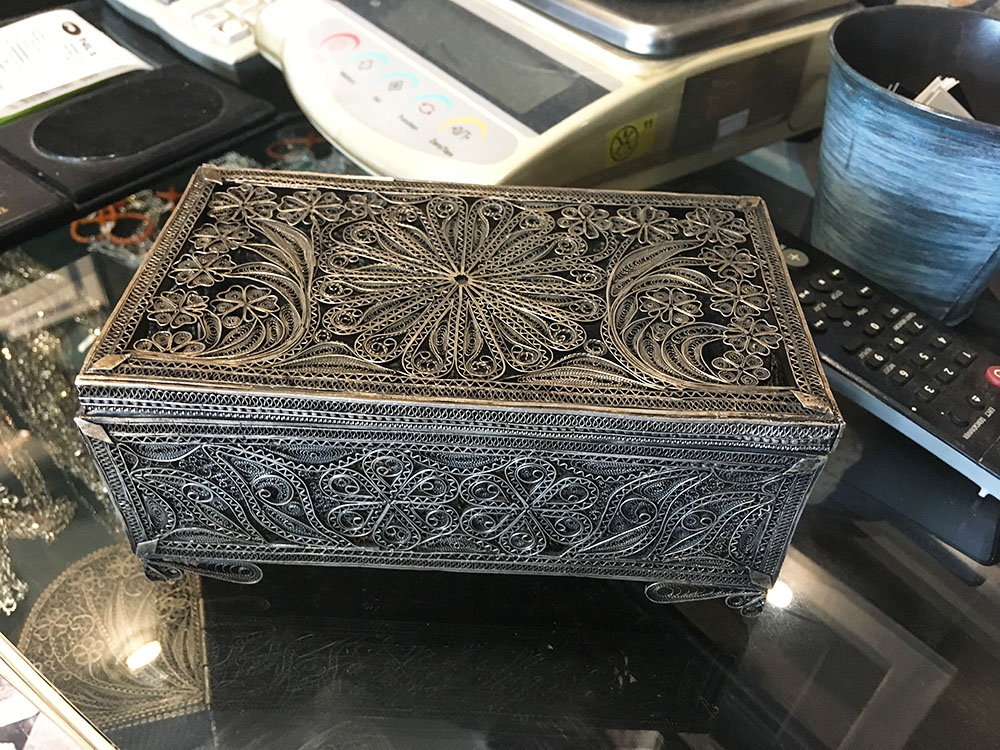 The finished box can be seen today for sale in Krenare’s store. Photo courtesy of Krenare RakovicaRebuilding a business lost to war

Krenare remembers images of broken glass, empty cases and a family livelihood shattered by the war.

“We came back and the store was… nothing was left, all the tools, everything,” Krenare said.

This was a common scene across many Kosovar cities, as Krenare recounted how stores were burglarized, homes burnt and families ripped apart by the violence of a war that claimed the lives of over 13,000 living in Kosovo.

Skender and his family began to rebuild their lives immediately. He took a job at the Association of Regional Development Agencies (ADRA) where he served as a driver and later a logistics specialist. Skender would remain employed there long enough to restock the shop with tools and open their doors for business again.

At the same time, Krenare was finishing her last years of high school and creating plans for the future, which at the time did not include her father’s line of work.

Krenare earned her bachelor’s degree in architecture from the University of Pristina in 2008. Her father always hoped Krenare and her two younger sisters would become more than silversmiths because the occupation is increasingly unstable and highly dependent on the fluctuating Kosovar economy.

Premtina, Krenare’s younger sister, remembered her father as “very ambitious when it came to us girls. He thought that his eldest daughter (Krenare) would become an architect, which is fancier than, you know, being a jeweler.”

However, this all changed when Skender was diagnosed with brain cancer in 2002.

Throughout his two-year battle with cancer, he still worked in the store, continuing to create impossibly beautiful works that range from small boxes to impressively elaborate pirate ships.

Skender died after a second surgery in 2004, leaving a great impact from his work and his presence as a person. This was especially true for Krenare.

Krenare was then drawn into learning her father’s craft in the same way he had begun over 20 years ago—with a sense of passion and much trial and error.

When Krenare started to teach herself the trade, she was guided by this feedback as well as her own ingenuity and childhood memories.

“It came also from remembering my father, it started like that,” Krenare said.

Filigree is now being kept alive primarily through Kosovo tourism efforts and the few families who continue to pass down the trade.

While Krenare believes the interest in filigree has grown, the number of workers continues to decrease. Filigree centers in Kosovo, such as those in Prizren and Peja, formerly housed hundreds of workers who came to learn the skills needed to either work in the local factory or open their own stores.

Krenare has adopted her own style of filigree. While still including the small swirling motifs seen in traditional works, Krenare creates pieces that are simple, sturdy and affordable.

Each piece within the 8-year-old store is one of a kind, all according to her own modern filigree style that aligns with her own interests, allowing for a freedom in her work.

“She is happiest when she is free to do what she wants to,” Premtina said.

And for Krenare, this happiness comes from working as a silversmith and carrying on the legacy of her father. 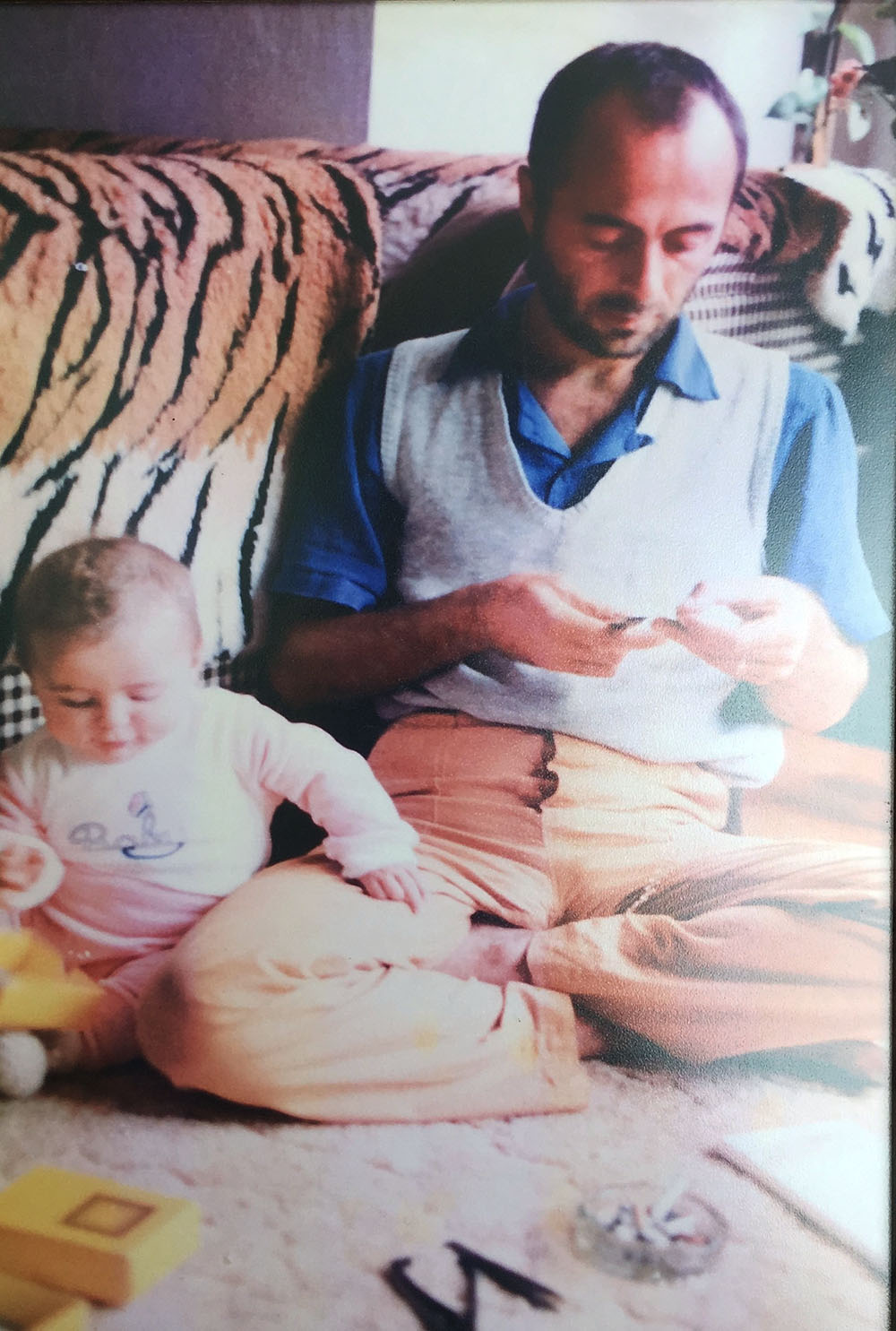 A young Krenare Rakovica sits next to her father, Skender, while constructing a silver filigree piece to be sold in his store in Pristina, now closed. Photo courtesy of Krenare Rakovica

Editor’s note: Jessica Baloun participated in a Miami Study Abroad program in Kosovo this past summer. The students study in Kosovo, a new democracy in the Balkan region of Europe. This is one of a series of reports from these Oxford students on their experiences in that distant region.