Miami President Greg Crawford checks out one of the camels on display during Monday’s IsraelFest uptown.  Camels are a key mode of transportation and a tourist attraction in the Negev Desert in Israel. “I never thought I would see a camel in Oxford,” Crawford said. Photo by Leanne Stahulak

Pumping music, roasting meat and the sight of a large camel drew hundreds of people to the uptown park on Monday, April 29 for IsraelFest 2019.

The Students for Israel at Miami and the Hillel Association of Jewish Students hosted IsraelFest to celebrate Israel’s national independence day and showcase different features of Israeli culture.

Due to a scheduling conflict between the school calendar and Yom Ha’atzmaut (Israeli Independence Day), celebrated internationally on May 8-9, the organizations decided to celebrate in Oxford early this year. Johnny Maxwell, president of Students for Israel at Miami, cited IsraelFest as the biggest event hosted by the two groups.

The purpose of the event is to teach people about Israel Maxwell said, “whether that’s culture, society, art, music, politics [or] different identities in Israel, and we just try to have a different focus each year.”

This year’s festival focused on the arts. Festival visitors could paint graffiti on a large wooden wall, paint t-shirts, learn how to make hummus and plant seedlings. Maxwell emphasized that the event focused on art in order to go “Beyond just painting.”

“Each art project connects to a larger theme in Israel,” Maxwell said. “The graffiti connects to Tel Aviv and how Tel Aviv is a very grungy, but also modern city. The hummus making, that’s food art, and that connects to all the different cultures that came to Israel when the state was established, and how they each have their own different recipes and foods and traditions. And then we also have seed planting and recycled cans, and that teaches about sustainability efforts in Israel.”

Members of Hillel and Students for Israel at Miami milled around in the crowd as people shifted between different activities. For anyone interested, members of either organization encouraged discussions about the social, political or cultural aspects of Israel. 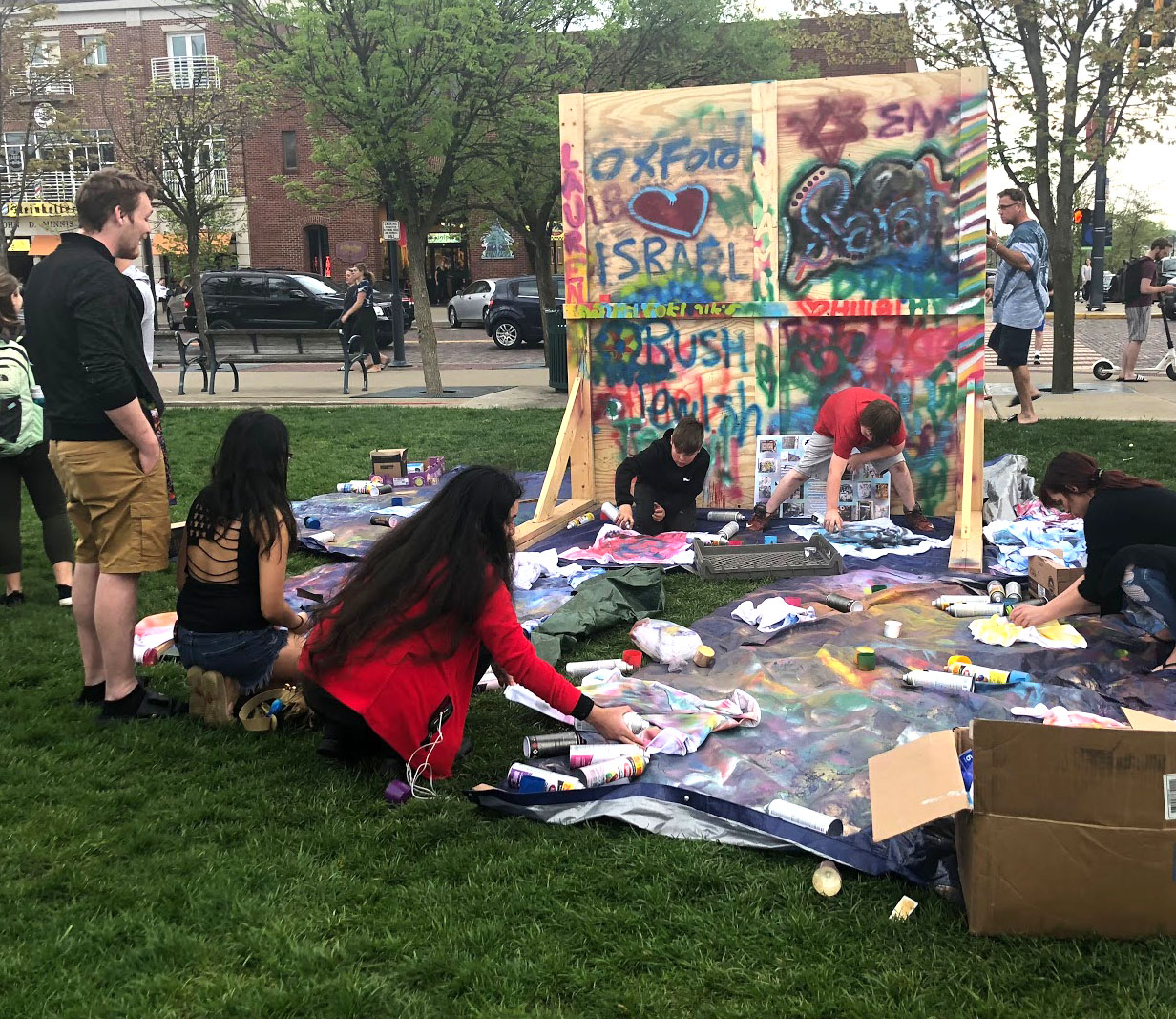 Festival goers were invited to paint their thoughts about the country on a graffiti wall at Monday’s event. Photo by Leanne Stahulak

“There’s a lot that goes on there that people are not aware of,  because they only hear one thing in the media and one thing only,” Marcy Miller, executive director of Hillel, said. “And we want to try and help people understand that there’s a whole set of morals, and values, and culture and life there that goes well beyond what people read about in the news. Not to ignore what goes on in the news, but to share that it’s a small country but big in stature.”

To truly reflect on life and living in Israel, a few Israeli Oxford citizens also attended the event. Lior Bezalel, 28, moved from Israel to Oxford in August 2018. She now works at Hillel with the Jewish Agency for Israel and as an Israel Fellow, talking to Miami students about the country she lived in for most of her life.

“The idea is to show people a side of Israel that they might never have heard or saw,” Bezalel said. “Like a lot of things in life, Israel definitely has its challenges, but it’s so much more than what we hear on the news. And the Israeli activities that Hillel does — especially IsraelFest —we’re trying to show a different side of Israel. And to show that Israel, it’s not only what we hear on the news, but also the people and the culture.”

By helping organize the festival and taking the time to talk to participants, Bezalel did her part to share that side of Israel with Oxford.

“Israel is a beautiful place, and as an Israeli who lived there my entire life, I wish to share and show people Israel the way I see it… walking in Florentine neighborhood in Tel Aviv looking at all the unique graffiti on the building, going to the market in Jerusalem tasting and smelling the amazing Israeli food… This is the Israel I know and love.”

Asaf Munk, 19, also an Israeli, participates in the Chaverim M’Israel (Friends from Israel) program through the Jewish Federation Cincinnati. Munk goes around to public schools in the Cincinnati area to spread awareness about his country and his people, inviting others to ask questions and engage with him about Israeli culture.

“Most of the people here that I met… in general I’m the first Israeli they ever met in their life, and they’re all like, ‘Wow, Israel is so cool,’” Munk said. “I think it’s amazing, I’m working with the Jewish and non-Jewish community.”

Bezalel has invited Munk to Hillel events in the past, and Munk happily attended IsraelFest for the first time.

“The people here in Miami University are amazing people, so accepting, so inclusive, make me feel like home away from home, so that’s amazing for me,” Munk said.

Daniela Reuter, the president of Hillel, echoed a similar sentiment. After studying abroad in Israel last semester, returning to her student community helped ease her transition back home.

“I kinda got to just come back and continue loving and learning about Israel and help other people do that,” Reuter said. Becoming more involved with Hillel helped her transition, but so did the acceptance of the community.

“The Oxford community is honestly very open-minded about us,” Reuter said. “We do things here a lot; we’ll do an IsraelFest every year and people love it, or we have community events, and the members of the community are super open to learning and wanting to be a part of what we do. So just the open-mindedness is a Jewish aspect but also something that we really appreciate.”

Miami President Greg Crawford, who attended the festival on Monday, agreed that events like IsraelFest will only continue to bring members of the Oxford community closer together.

“I just think it’s interesting for all of us to come out here and embrace the community and learn from each other,” Crawford said. “I think all of these community events help campus in a big way where it brings people together, camaraderie, collaboration, partnerships, and just getting to know one another.”