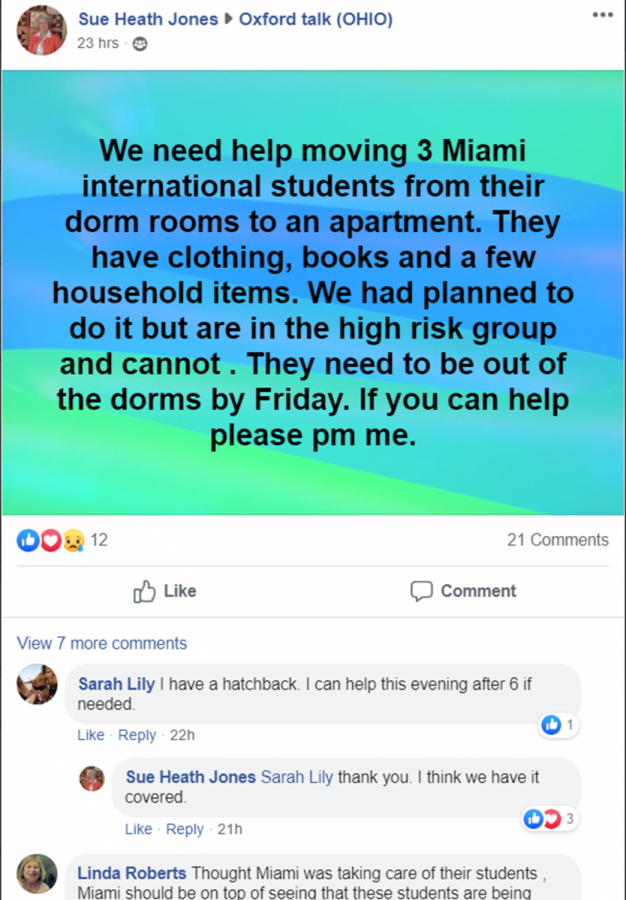 On Monday, March 16, Miami students still living in the dorms awoke to a message from the university telling them to move out by 5 p.m. this Saturday, March 21.

Students wanting to remain in on-campus housing during spring break and beyond had to file a request and be granted an exemption by the university. Students with exemptions would be consolidated into specific dorms, but they had to move out of their current housing by Saturday. Anyone still in a dorm on March 27 will not be eligible for a room and board refund, according to the university.

The coronavirus pandemic, which prompted Miami to close its buildings and convert all classes from face-to-face to online instruction, has forced a difficult choice on many of Miami’s international students, especially the hundreds who are from China. Should they stay in Oxford, either in the consolidated dorms or in off-campus housing?

Going home, to ride out the pandemic in familiar surroundings with family and loved ones, is problematic with many airline flights canceled and a certain quarantine when and if they do reach China. Staying in Oxford also offers uncertainties, and many students have parents and family members in China urging them to come home.

News reports from China say the virus spread may have peaked there, while health officials in the U.S. say we should expect a surge of new cases here and people are being advised to remain at home.

Lisa He received the “move out” notice  just as she woke up in her on-campus dorm Monday. She then immediately booked a flight to China, with three transfers. How long the flight and its connections will remain viable, is unknown.

“I talked with my family and we came into consensus to stay in the U.S.,” said Sheng Ding, a senior computer science major at Miami. “The risk of traveling back to China is way higher than staying in my house here.”

Ding lives off-campus at the Annex apartments, on Magnolia Drive. He said he prefers to stay in there and keep his distance from other people.

For those who choose to go back to China, it is unclear if they will ever be able to return to the United States. The current rule is that if a student does not return within five months of leaving the United States, their student visa will expire. The wait for a new student visa may take until December.

‍Traveling also poses physical risk. Airports in the United States are now crowded, and crowds offer the virus a chance to spread easier.

Once students get back to China, they may not be able to continue their studies with Miami even though courses are now online. Internet censorship in China could make connections to  the virtual class really poor. The time differences between the two countries will also affect students’ lives if they try to attend online classes.

Despite Ding and He having made clear decisions about going back or not, each international student’s situation is different. Some, who decided to return home only to have their tickets get canceled. Some decided to stay in Oxford and prepare for social isolation.

The parents of many international students are worried. Many are sharing information on WeChat, a Chinese social media messaging site. WeChat groups exchange thousands of messages among parents every day, talking about what’s the best way to keep their children away from the virus.

“I kept reminding my son every day to stay healthy and wear masks,” said a woman who posted as “Bohan’s mother,”  in a group chat, on the site.

Miami’s Global Initiatives Office continuously sends out emails to answer students’ questions. The university has canceled all of its overseas programs and is no longer authorizing overseas travel for university business.

The office offers advice to students on visa issues and provides virtual and drop-in office hours to better help answer student questions about their status and classes.

Residents in Oxford have been willing to help international students in moving out of the dorms.