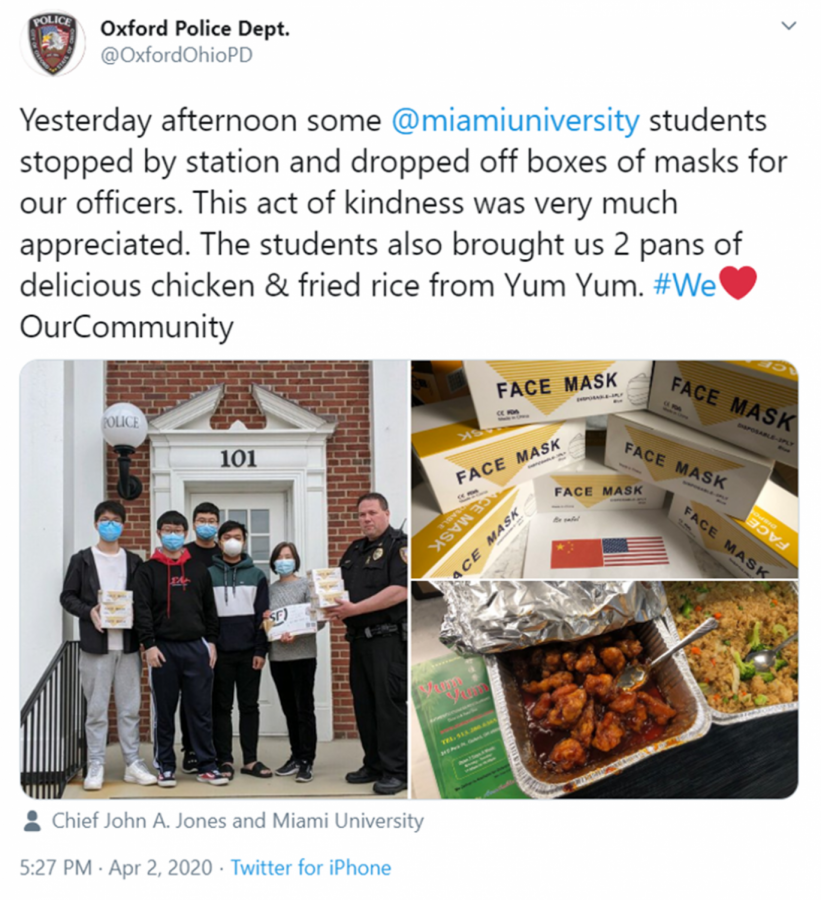 Oxford Police posted their thanks as well as some pictures about the Chinese students and parents who donated masks to the department on the department’s Facebook page. The pictures show Police Chief John Johns accepting the masks from a group of students, as well as the boxes of masks and trays of food the students gave to police.

The donations were organized by parents who got together via WeChat, a social media messaging site widely used by Chinese students to talk with their families back home. The organizers said they were motivated by a desire to help the Oxford community deal with the COVID-19 pandemic.

While most students left campus after Miami ended face-to-face instruction in favor of remote learning and closed most dormitories in March, hundreds of Chinese students remain in Oxford living in off-campus housing and a consolidated dormitory. In many cases, they were unable to arrange travel back home because of canceled flights and disrupted transportation networks. That left their parents in China worried about their safety as the virus spread in the United States.

“I chat every day in the group chat with parents,” said a woman identified on WeChat as “Zhu’s mother.”

“I can know information, like current U.S. and China’s policies, flight status, CAA (civil aviation administration) restrictions, all kinds of information,” she said.

As the epidemic got worse and worse, masks, gloves, and other medical supplies were in increasingly short supply in this country. Many Chinese parents began to send masks from China to the U.S. through all kinds of delivery services and they exchanged messages through WeChat.

Hanzhou Zhang, a senior computer science major at Miami, and his mother, Xinyu Zhou, realized that Oxford residents and departments might need masks as well. They contacted several local departments and started to organize parents to donate.

“Donate masks, we have had this idea since the beginning of this epidemic,” Xinyu Zhou said. “But because of the cultural differences, we’re afraid of giving away something that other people don’t need as much.”

After repeatedly checking the specifications of masks and the need for epidemic prevention supplies with the school, Xinyu Zhou sent out the donation proposal in the early morning of March 22 to the 2020 Class Chinese parents group.

The proposal was quickly approved and supported by more than 70 parents. With more people, money, and responsibilities, Xinyu Zhou said the operational difficulty was a little more difficult than she experienced when just sending masks to her son and his roommates.

This time she was dealing with official government departments and needed to make sure the mask met the specific needs of those groups.

“The hardest thing is to find a safe and credible channel for such a large amount of masks sent out to the U.S.,” Xinyu Zhou said. “I really appreciate every friend’s and parent’s help.”

With the help of her friends, after negotiating with the factory about the masks type, price, postage and the possibility of customs clearance, 6,000 disposable surgical masks were sent on March 24 from Hong Kong through DHL. 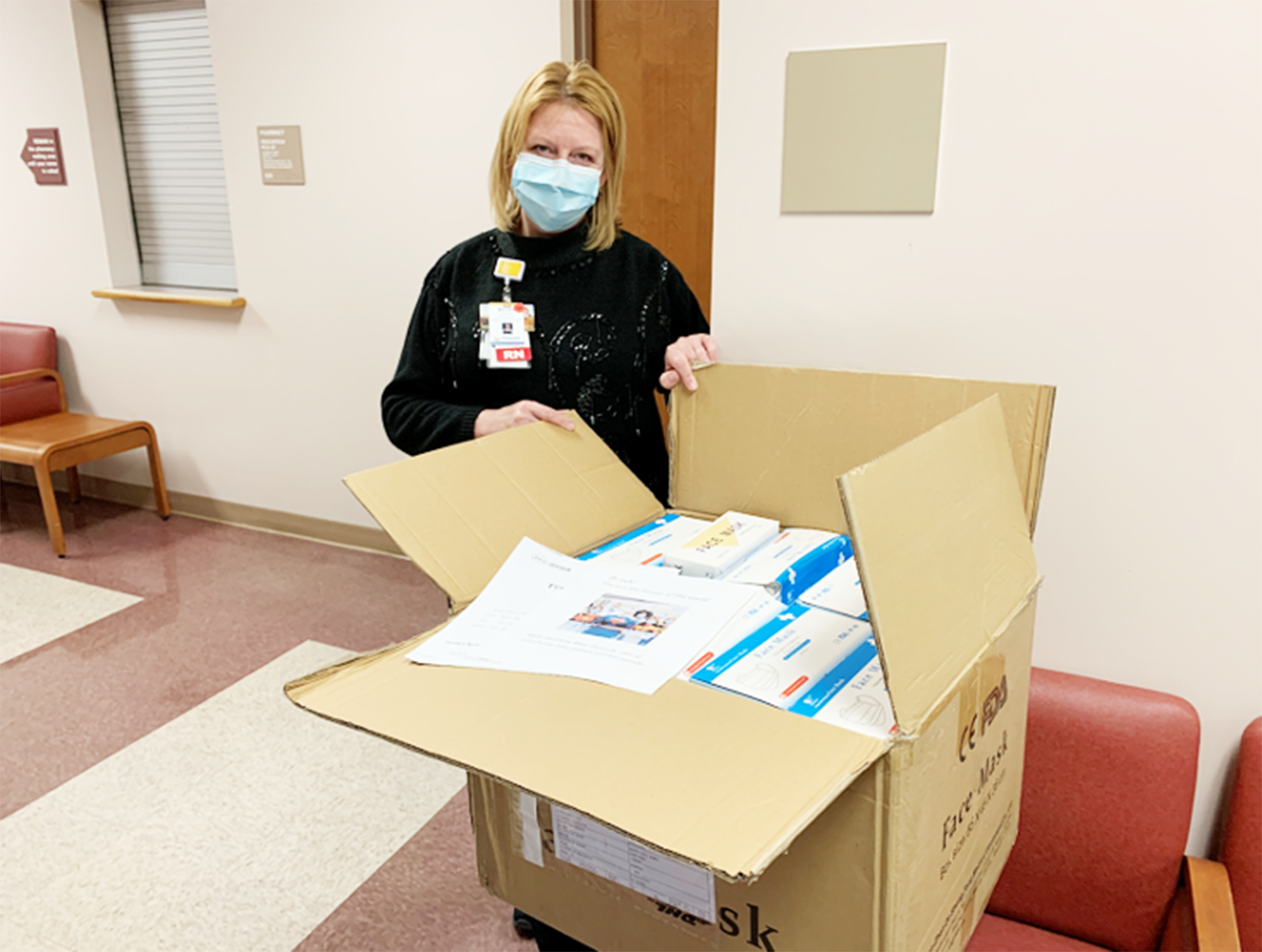 The masks arrived in Oxford about a week later. Hanzhou Zhang worked on connecting and distributing them to local departments with the help of Molly Heidemann, director of International Students and Scholar Services at Miami. 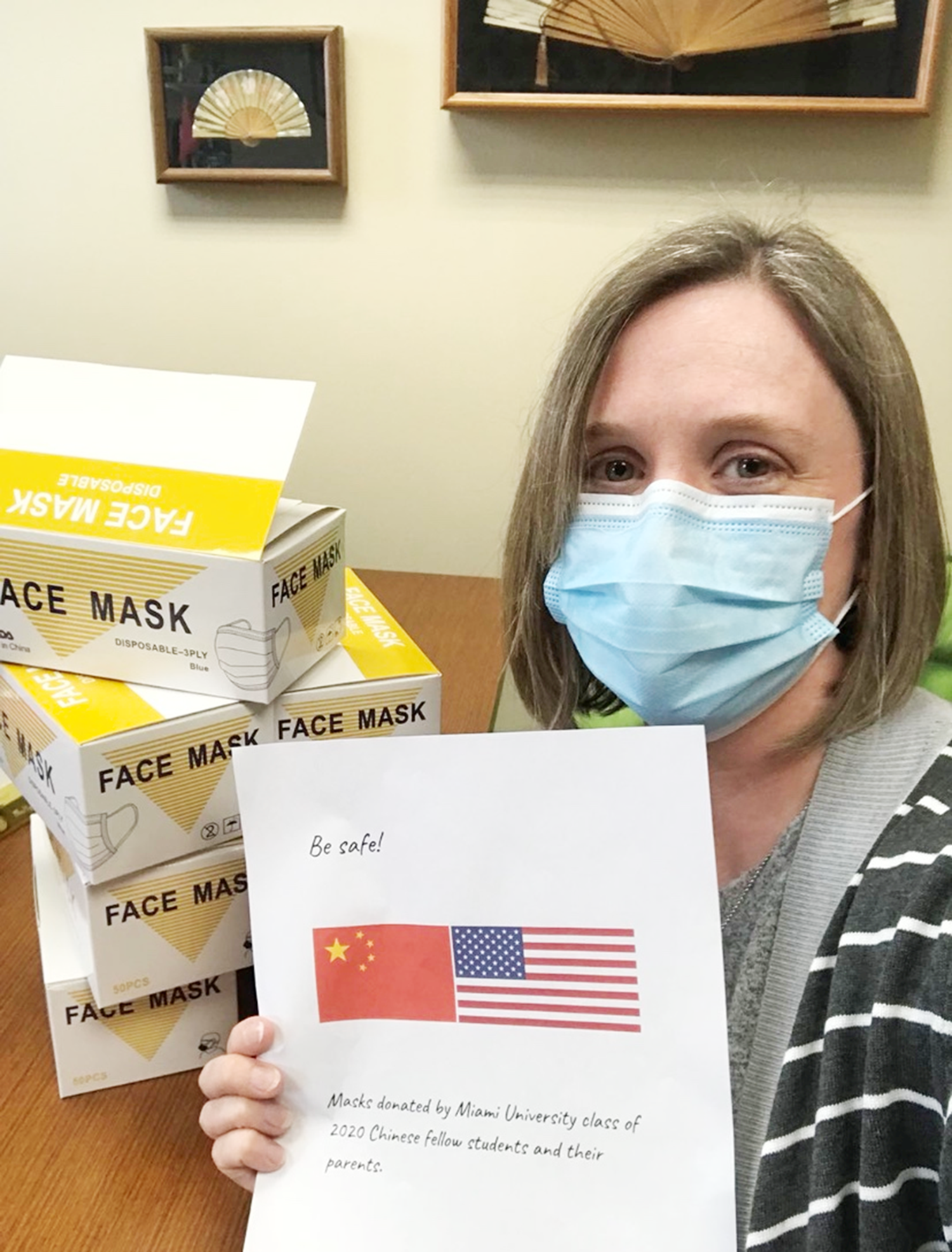 Molly Heidemann, director of International Students and Scholar Services, poses with some of the donated masks. Photo by Hanzhou Zhang