In “My Anxiety,” Performer Illustrates the Civil War in his Brain 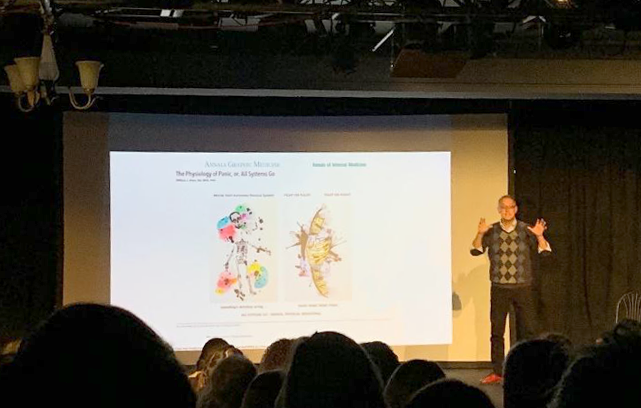 On Wednesday, Feb. 27 , a crowd of more than 100 people filled the auditorium in the Oxford Community Arts Center to look inside Doan’s mind. Each show uniquely starts with his “emotional support human” and assistant Tyler Sperrazza picking a random slide and he tells his story from there.

The 50-minute show included drawings with many vibrant colors and brief audiovisuals that all interacted with his story.

The title for this show, “Frozen in the Toilet Paper Aisle of Life,” comes from a real-life experience: he had a panic attack in Walmart just trying to buy toilet paper.

Throughout the show, he displayed some of his drawings which described how he was feeling when he couldn’t find the words for it. Many of the drawings were abstract and showed the strong emotions he was feeling throughout various points. 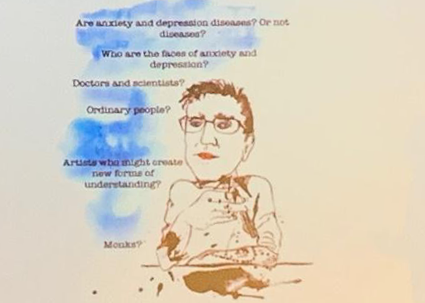 A drawing that reflects Doan’s thoughts about depression. Photo by Josiah Collins

Doan’s show didn’t just focus on his own experience; he also took time to also explain to those who do not suffer as severely from anxiety or depression what it could feel like for the people who deal with these conditions on a daily basis.

He highlighted that there is still a lot to learn about these disorders, and he insisted that when diagnosing mental health disorders, we need to focus on people’s lives and individual experiences instead of checking off the boxes.

He used a great amount of humor in his show to try and lessen the heaviness that could come with this topic, and often interacted with the audience and his family.

“The diagnosis is not your destiny,” Doan said.