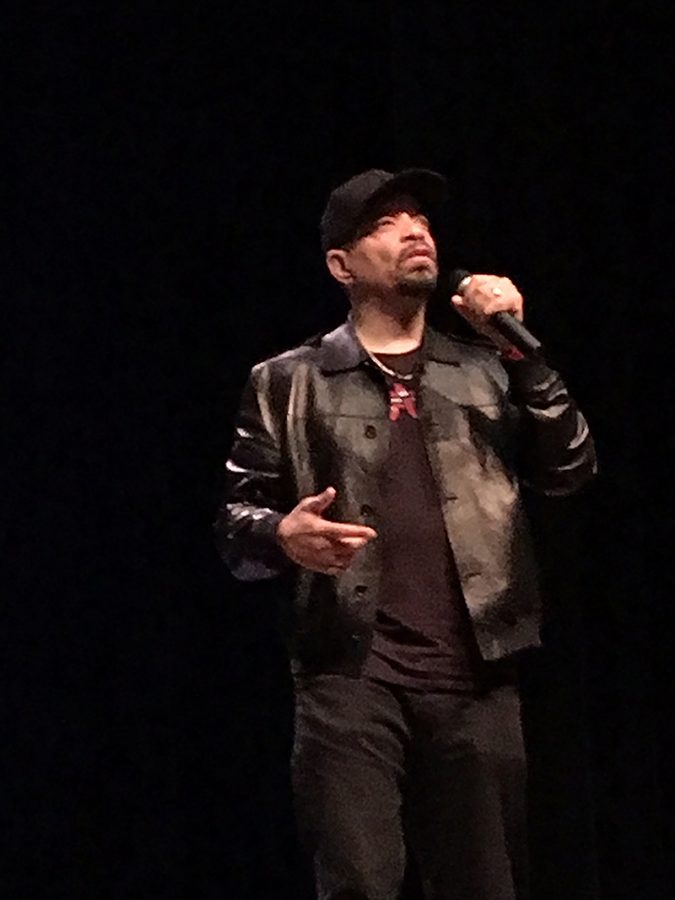 Ice-T speaks to an audience of some 700 people at Miami University. Photos by A.L. Blair

Maybe you were a fan of his 1987 debut album, Rhyme Pays. Maybe you read about the controversy surrounding his heavy metal band Body Count’s song “Cop Killer,” released under his most well-known album, O.G. Original Gangster. Or maybe you’re a fan of his character, Sgt. Fin Tutuola, on NBC’s Law and Order: Special Victims Unit, now in its 20th season.

Whatever you know about Ice-T, he wasn’t in Oxford Monday night to rap (although he did a little) or solve a crime with co-star Mariska Hargitay.

He was here to talk about race relations, how to break down cultural barriers and what we can do to change the narrative on those issues.

Ice-T, the stage name of Tracey Lauren Marrow, came at the invitation of Miami University to talk in classroom seminars, at a press conference and in a lecture before 700 people at Hall Auditorium.

“There has been tremendous progress with racism,” he said in his lecture. “After hip-hop, things changed and white kids said, ‘You know what? Black kids aren’t mad at us… they are mad at probably the same thing I’m mad at. So, you know what? We aren’t your enemy. We just want rights.’”

It’s the same message Miami’s community members tried to spread at a protest in Armstrong Student Center in March. The protest was in response to student Thomas Wright’s use of a racial slur referring to black students in a group message.

Miami’s classrooms are historically not diverse. As of October 2017, only 13.4 percent of undergraduates were non-white, university data shows. Oxford itself is about 86 percent white.

“What is the responsibility of today’s young white American to being part of the solution and pushing against racism?” asked Newberry.

“I mean there’s no responsibility to white America. Just don’t be racist,” Ice-T responded. “Just don’t judge people by how they look.”

To break down barriers, citizens have to first find out what they share in common with others. But while Ice-T has hope for the future, he wasn’t speaking naively.

He was involved with the Crips, a gang based in L.A. He sold drugs, committed high-stakes crime and has two bullets in his legs to show for it. He knows how people can get sucked into a violent lifestyle and has friends in prison that can attest to it.

Ice-T tried the military, but it was hip-hop that saved him.

“Hip-hop came out and I was like, ‘This is something I might be able to do!’” he said.

He heard a song by Schoolly D called “P.S.K” (Park Side Killers) and changed his style to rap about life.

“As we became more knowledgeable about life, the music started to change,” the rapper said. “We started talking about politics and race issues, just telling people what we were living in the hood and guess what? White people, like black kids, loved it because it was a pass into the black community without getting shot at. Now all of the sudden you ridin’ in the six-fo’ with Dre.”

But music can’t solve everything. Ice-T believes that a course based on humanity should be mandatory curriculum for elementary through college level students. He thinks students need to learn where their peers who look different from them originate and how their cultures have influenced them.

“You can’t respect anyone if you don’t know anything about them,” said Ice-T.  “With this humanity class, we can learn to respect everyone.”