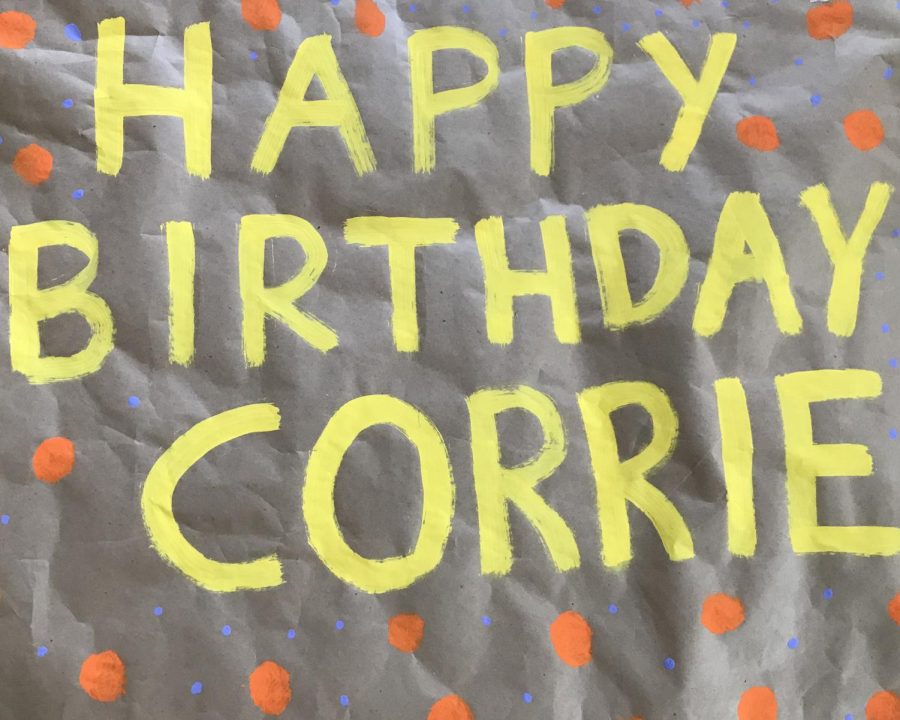 Neighbors surprised Corrie Branche on her birthday with banners and a parade outside of her house. Photo by Logan Branche

Corrie Branche, my younger sister, is a high school junior in Los Angeles whose world was completely turned upside down last month due to the coronavirus pandemic.

This was true for most of us, but the difference is that Corrie is a teenager — a high school junior — which is a particularly difficult time for many people. Surviving quarantine is hard at any age. Corrie believes it’s harder as you’re coming of age.Corrie had big birthday plans — a trip to Paris planned for the week leading up to her birthday April 4, and orchestra seats for the play “Hamilton” on her birthday. She couldn’t wait. “This was supposed to be my best birthday yet,” she said.Then came the pandemic. Within a two-week period, Corrie went from excitement about her birthday and upcoming college plans, to complete lockdown. The coronavirus pandemic derailed nearly all of the short-term plans in Corrie’s life. She was forced to adapt and try to make the best of it.“We’ve always made a huge deal out of birthdays in my family,” said Corrie. “We usually celebrate for a whole week.” When President Trump banned all travel from Europe just two weeks before Corrie’s birthday, the trip to Paris suddenly was out of the question. Then when the mayor of Los Angeles issued a “stay at home” order and closed all non-essential businesses, “Hamilton” was off the table. Corrie is the youngest of four children and her mother, Karol Watson, admits that Corrie sometimes gets short shrift. “Corrie is often forced to adapt her plans around her many siblings,” Karol said. She felt horribly that not only would Corrie miss her birthday trip, but be forced to spend her birthday behind closed doors, without her friends, and holed up with her parents and siblings.Karol sees this as a pattern. ”Corrie was born in the wake of 9/11, she grew up during the great recession, and now she’s preparing to leave home and go to college during a pandemic,” Karol said. And while Corrie was still focused on her birthday, Karol was most worried about Corrie’s college plans.“What about the SAT?” Karol asked. Having diligently studied SAT workbooks for months, Corrie had been planning to take the SAT in March of this year. As the scope of the pandemic began to become apparent, Corrie logged onto the College Board website (the group that administers the SAT) daily to make sure her test center hadn’t been canceled. She kept seeing centers all around California being canceled but her site was still listed as ”active” so she breathed a sigh of relief.Unfortunately that relief was short lived. When Corrie drove to her test site the morning of her SAT, she found a deserted parking lot. As she walked into the school she was greeted by a representative assigned as the bearer of bad news. Her test had been cancelled.She was forced to reschedule her SAT, and given a May test date, which was promptly canceled and replaced by a June test date, which was also promptly canceled. Ultimately, Corrie was forced into SAT limbo, being given a September test date. But with all the uncertainty that the pandemic brings Corrie still doesn’t know when (or if) she will take her SAT.But what about Corrie’s birthday? Pandemic or not, her friends would not let it pass unnoticed.

Around noon on the day, Corrie was drawn to her front yard by honking horns, sirens and shouting. A makeshift convoy of neighbors in their cars with signs and streamers, all celebrating Corrie’s birthday, rolled down the street in parade style.The idea for the parade came from Sadie Healy, one of Corrie’s childhood friends, who lives across the street.Afterward, Karol recounted how happy she was that Corrie has something memorable about her 17th birthday, other than cancelled plans, and she said she was absolutely amazed at the nearly dozen neighbors that took part in the celebration.

Despite derailed 17th birthday plans, and uncertain short-term future, Corrie realizes how lucky she is. She remembers a quote her dad always says: “Life is what happens while you’re making other plans.”

Logan “Chris” Branche is a junior at Miami, majoring in sports leadership and management.