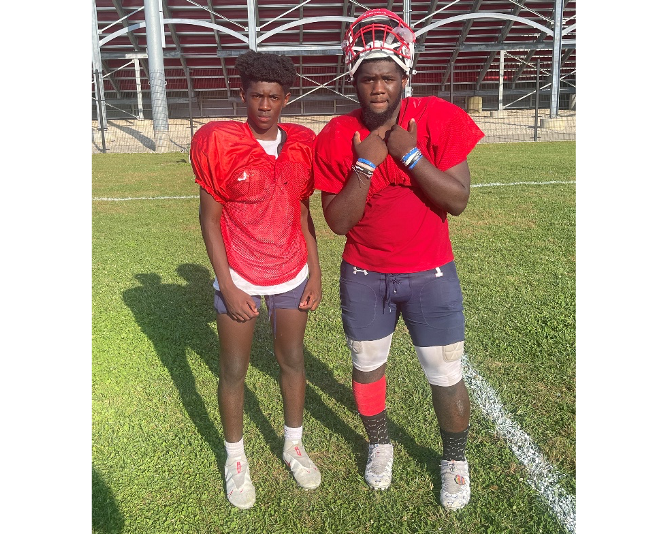 For two of the Talawanda High School’s football program’s stand-out players, playing defense has been a family affair.

Senior defensive lineman D.J. Morris-Williams and freshman cornerback Demetrius “Meech” Morris-Williams are two of the team’s top athletes, Coach Jay Volker said. According to the boys, their father Marques also played football for Talawanda and was one of the all-time sack leaders in the program’s history.

After junior Caleb Dillhoff with 30 solo tackles,  D.J. is second on the team with 24. Meech has 11 solo tackles, the most of any freshman.

The brothers feel that it is an advantage for themselves and the team when they are both out on the field at the same time.

“Us being brothers helps a lot because he feeds off of my energy,” said D.J. “It feels almost like a friendly competition out there while we’re still trying to play for our team.”

Both said they love the contact in football — making hits.

“My favorite part is probably getting all of my anger out, leaving all of the emotions on the field and just competing out there,” Meech said.

Playing youth sports has not always been a walk in the park, said the boys, who have lived in the Talawanda district their entire lives.

“Growing up, it’s tough because I was one of the only black kids on the team,” said D.J. “A lot of opposing teams would try to use that against me, calling me racial slurs and trying to get in my head, but I really just never let it affect me and that’s got me to where I am now.”

The Talawanda football team’s losing streak has been an emotional challenge, the boys said. The team has a 0-5 record so far this season, after a 2-7 season last year.

“We grew up winning a lot,” D.J. said. “When I got to middle school we started losing more. We are not fans of losing; we are very bad losers. When we lose, we don’t talk to anybody for at least a day or two. We just go about our day, keep studying and try to get better.”

D.J. has held leadership roles on the team under Volker, who took over the program in 2021. This year he is a team captain.

“When you come out he is usually the guy you hear on the practice field,” Volker said. “He’s always talking and trying to get everyone juiced up.”

His younger brother, on the other hand, is quieter and perhaps a little more athletic, Volker said. “Having those two different mentalities has been fun to have around,” he said.

Off-field, Meech said that he likes to hang out with friends and play PlayStation.

Both brothers hope to play sports in college. D.J. just released his junior year football highlights with the help of his brother. He said he plans to either study financial management or become a cosmetologist.

Meech, who also plays basketball and baseball for Talawanda, said he is interested in studying to become a sports trainer.

The Brave look to capture their first win of the season on the road against Harrison this Friday.