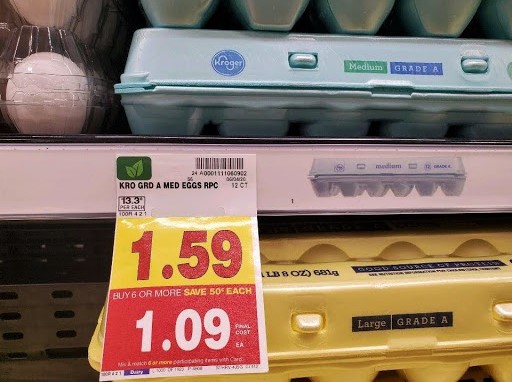 The price for eggs, like these at Oxford’s Kroger, increased by 16% in April, as grocery prices went up at the highest rate in nearly 50 years. Photo by Blake Boyd

When Ohio Gov. Mike DeWine closed all Ohio bars and restaurants  March 15, consumers had to shift their food and drink spending elsewhere. With such a high demand, that need would be filled by grocery chains like Kroger and Walmart and local stores like Oxford’s MOON Co-Op.

“You would probably think that with this increased demand, the supermarkets would be selling more, so prices would drop,” said John-Patrick Paraskevas, an assistant professor in Miami’s management department of the Farmer School of Business.

Yet, this has not been the case. April grocery prices jumped nearly 3% in comparison to March, according to the Bureau of Labor Statistics’ (BLS) Consumer Price Index, the largest increase since February 1974.

As the coronavirus pandemic unfolds, escalating costs of staples such as milk, meats, eggs and bread have become a reality for many in Oxford, affecting what they can put on the table.

Eggs experienced the largest price change in April, an over 16% increase. Paraskevas said farmers overproduced in 2019 and made the decision to cut back on egg production this year. The supply chain’s adjustment left grocery stores unprepared for COVID-19, as demand skyrocketed and the supply was lower than last year.

“It’s not easy to just flip the switch because, really, what they need is more hens,” said Paraskevas, adding it could take months for them to match their product demands.

Paraskevas owed the price increase to a multitude of factors. The reasons behind it are not so much the groceries themselves, he said, but rather what goes into the larger supply chain system.

The spread of the coronavirus has reached every corner of the world, creating consequences to the global economy. As of June 10, nearly two million U.S. cases had been reported with more than 1,000 in Butler County, according to Butler County General Health District data.

The virus forced food manufacturers to implement safety measures, such as social distancing and buying new equipment, which Paraskevas said are central reasons for the rising prices.

Elizabeth Week, general manager of the MOON Co-Op, in Oxford, said prices have remained steady, but they have run out-of-stock of some items. They have also instituted policies for customers and employees, including a request for everyone to wear masks. 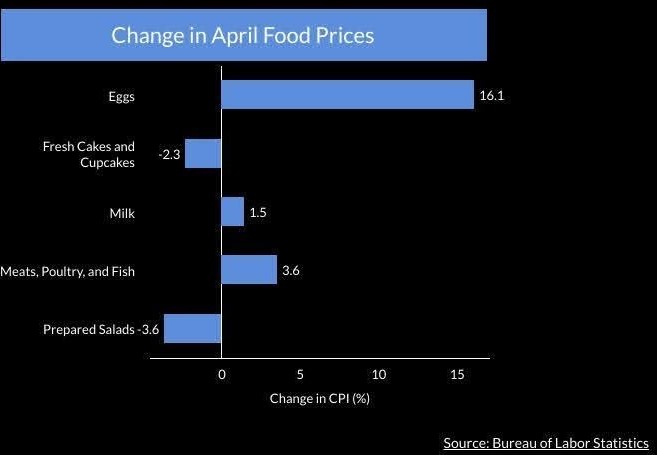 While grocery prices overall have increased, some items like prepared salads and fresh cakes and cupcakes are down. Graphic by Patrick Keck

‍May had economists cautiously optimistic after BLS figures showed 2.5 million new jobs were added and the unemployment rate dropped from 14.7 percent to 13.3 percent. Yet, Paraskevas couldn’t say if this would lead to lower grocery prices. Rather, he said the impact of reopening restaurants will give a better picture for future costs.

What the food market is exhibiting is a supply chain term, which Paraskevas refers to as the bullwhip effect, which is marked by a dramatic shift in demand. COVID-19 caused an influx in grocery shopping and mass exodus from restaurants, thus creating change in demand.

Now, with states reopening their economies, uncertainty persists for the supply chain.

“The question is how much will these suppliers ramp up production, which I’m sure a lot of them are leery to do so,” said Paraskevas, as some might be forecasting a reduction in demand for their products. “Whenever people go back to their normal buying behaviors, you would anticipate demand would actually drop and these producers don’t want to be stuck with extra capacity.”

Moving forward, Paraskevas projects food companies to have more thorough plans in case of another pandemic. Some changes, like plexiglass barriers between customers and cashiers, might become permanent.

“In the future, I would imagine that they will probably, if possible, do more testing on the front end to screen manufacturing facilities,” said Paraskevas. “If there were another (pandemic), hopefully they would be better suited.”