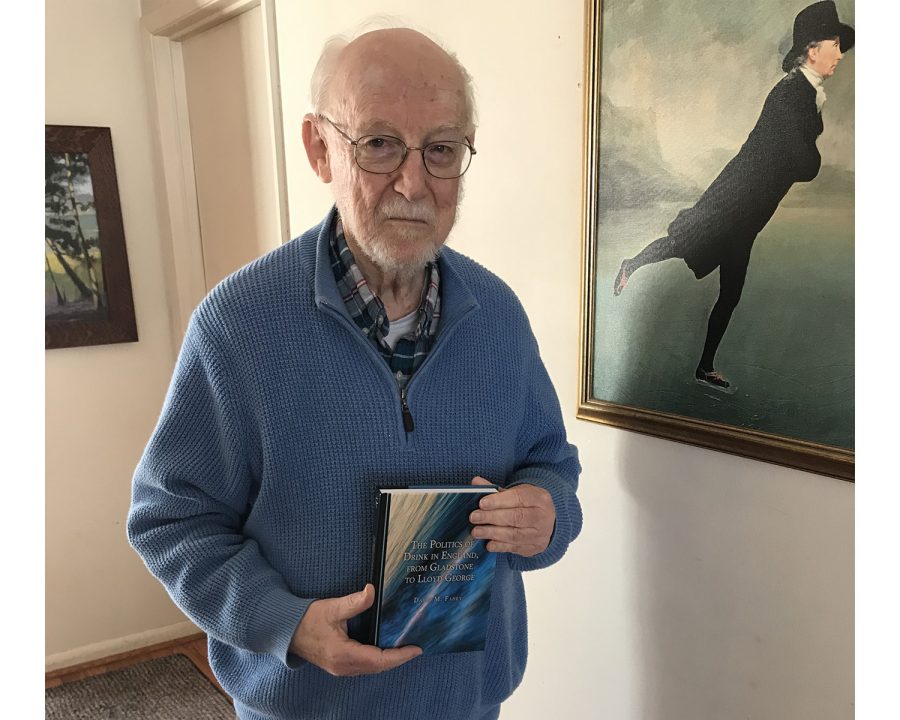 David Fahey holds a copy of one of his new books.

Some believe age is just a number.

Like anyone else, Oxford resident David Fahey rises out of bed, then goes to work. He boots up his computer. Answers emails. Talks on the phone. Reads. Thinks.

He recently published a book. His second in three years.

The 85-year-old professor, who’s a decade retired from Miami’s Department of History after 43 years in the classroom, is still as sharp as they come.

“A lot of professors retire and dream of moving away, hunting, fishing, being retired,” Fahey said. “Not me. I love what I’m doing.”

Fahey spends three to five hours a day researching history, mostly surrounding social alcohol and drug use throughout time. He talks to scholars, looks at journals and writes.

“After retirement, I was freed with so much time,” he said. “It’s so nice to not have to grade papers anymore. I can do what I want.”

He wanted the new book, but it was nearly a lost cause.

Titled “The Politics of Drink in England, from Gladstone to Lloyd George,” it focuses on the role of Parliament, party leaders and pressure groups in English policy-making surrounding alcohol. Published by Cambridge Scholars, Fahey started it five decades earlier as the offspring of a 1971 journal article he wrote.

A week away from completing his manuscript, Fahey’s hard drive failed. So did his backup. It forced a new start, almost from scratch.

In early 2021, Fahey became unresponsive and was hospitalized with a diagnosis of congestive heart failure. He recovered and persevered.

“It was extremely inconvenient,” Fahey said. “But I got it done.”

Jon Miller, an English professor at the University of Akron, teamed up with Fahey to co-edit a scholarly journal and write an encyclopedia, which was published by Santa Barbara in 2013. Both focused on social histories surrounding alcohol and drugs.

“I’ve never seen someone with such a devotion to learning,” Miller said. “His habits, his consistency are great. He just wants to learn more.”

“He holds incredible curiosity. He’s an industry model of consistency.”

His wife Mary Fuller, a retired Miami English professor who’s worked with plenty of academics, said her husband might be the most intellectually curious person she’s ever known.

“Other than his family, he loves nothing more than his work,” Fuller said. “He truly loves what he does.”

That’s what powers the Fahey machine.

“Why would you not ask questions?” Fahey said. “No matter who you are, we all ask questions in our minds. The fascinating part is answering.”

Questions drove Fahey from his boyhood home of Loudonville, New York, to a bachelor’s degree in history at nearby Siena College. He earned his master’s and Ph.D., also in history, at the University of Notre Dame.

“I enjoyed history from childhood,” Fahey said. “I loved stories. There’s no real question I was going to college to major in history, then going to grad school so I could teach it.”

After three-year teaching stints at Assumption College in Massachusetts and Indiana University Northwest in Gary, Fahey arrived at his now home for more than a half-century, Miami.

Fahey has written or edited a dozen books, most dealing with alcohol, drugs and temperance movements.

“I will only drink after a touchdown,” he said. “But some Saturdays, it’s too depressing.”

Fahey’s future work will be directed toward biographies of figures who played major roles in temperance movements. He’s been tracking down their grandchildren, nieces, nephews and cousins. It’s the next phase of questions bugging a curious mind.

But first, he has to watch his Fighting Irish host Cal on Saturday, Sept. 17. The cider will be ready. Then it’s back to work.