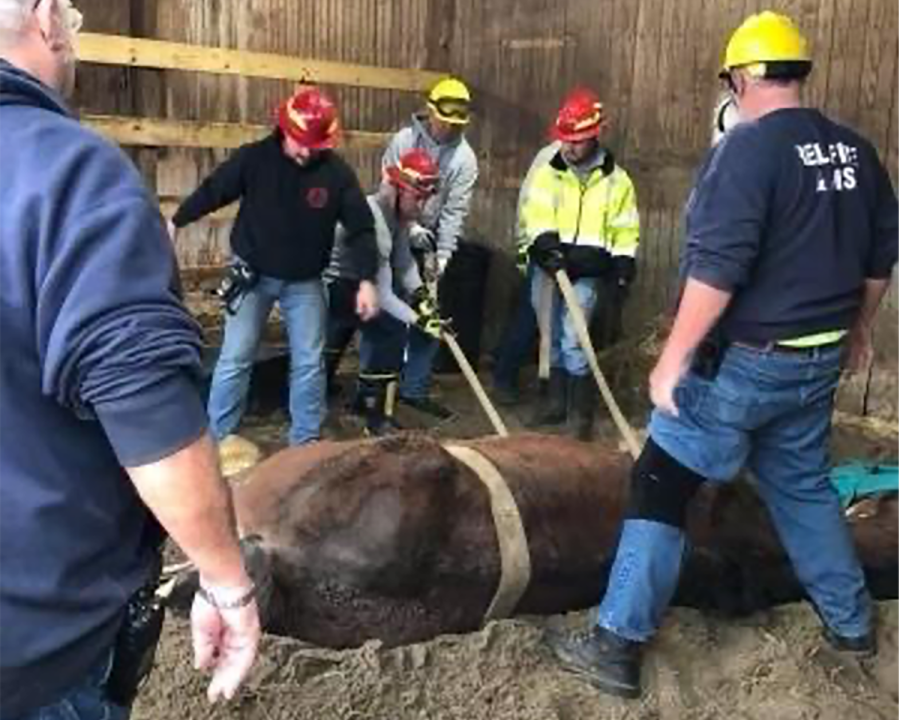 Members of the Reily Township Fire Department Large Animal Rescue Team attempt to lift a horse who got stuck in his stall and could not get up. Members of the team pictured are Dennis Conrad, Chad Owens, Sean Levenston,Clint Mayor and Roy Wesselman.

The Reily Township Fire Department, composed entirely of volunteers, is home to the oldest and busiest large animal rescue team in Butler County. The group consists of about 32 volunteers.

All its equipment has been purchased through donations. They used to have a fish fry to help raise money but have not had one since the start of the pandemic.

To rescue horses and cattle, they use a large tripod with straps, harnesses, and a winch they can attach to the animal and gradually lift it out of wherever it is stuck.

In recent years, the volunteers have rescued between 15 to 25 large animals a year. This includes pulling horses and cattle out of wells and lifting animals who are stuck in their stalls. Additionally, they rescue animals out of ponds, mudholes and ravines.

Reily has the capability of rescuing any type of large animal, fire chief Dennis Conrad said. The tripod that they use is designed to be able to lift an elephant.

Conrad said the most challenging rescues are when the animal is stuck in a tight location.

“We’ve had animals stuck in hay lofts before,” Conrad said. “We’ve had to call the veterinarian and get them tranquilized and lure them down the hay loft because they won’t go down the steps.”

The Reily Fire Department keeps a list of veterinarians so whenever they are in a certain township, they have someone they can call that is close by.

They have also rescued animals that were hit by cars or in a trailer that was wrecked. Even when the animals have died, sometimes the owners ask for the carcasses to be brought back home. While not being typical pets like dogs or cats, these large animals are still very special to their owners and are loved just the same, Conrad said.

The Reily rescue team has helped Oxford a couple of times in the last several years. They have also been to Germantown and Colerain in Ohio and Bright and Lawrenceburg in Indiana to name a few.

The volunteers do not get paid but the township has insurance on them. They provide workers’ compensation and pay for any injuries that occur.

The large animal rescue team started training in 2004 and has expanded over time.

“Basically, when we started it, we were just doing it for people in our area,” Conrad said. “We’re pretty agricultural here. We have a lot of people with cattle and horses. We sent people to classes to get trained on it and then we put on classes for the other fire departments too.”

Two of the firefighters at Reily’s fire department attended a three-day class at Eastern Kentucky University to learn the basics of animal rescue. They train at least three times a year, Conrad said.

“The majority of our fire department members come from a farm background, are active farmers or just have large animals themselves,” said fire captain Michael Schwab, who works with the team. “I think this gives us the biggest advantage. We saw a need in having a large animal rescue team and we really pushed to get this through our fire department, and we are fortunate enough our trustees supported it.”

The department trains with a full-size fiberglass horse that was donated to them by a neighboring fire department. Some of their equipment, they have made themselves.

“We took a firehose and got adapters on it to where we could wrap it around the horse and fill it with air and actually float one out of a pond,” Schwab said. “It’s just tricks you learn as you run into different situations.”

He said that while rescuing the large animal is the mission, it is very important that the crew gets home safely and that no one gets hurt.

“We want to see the large animal be healthy and have a successful rescue,” Schwab said. “But no matter what we are doing, whether it be an animal rescue or a fire, we want to see all of our personnel go home and be healthy. That is a win.”