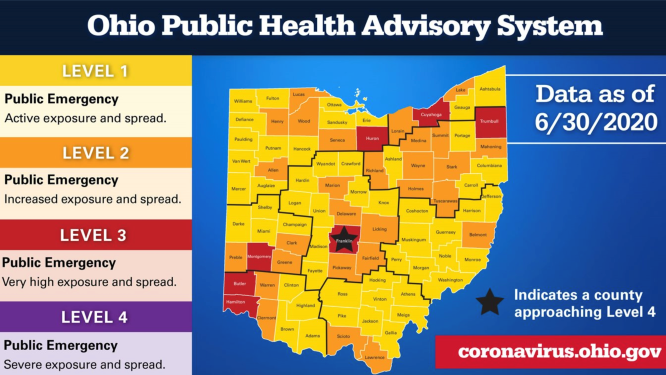 Butler County moved into the red emergency zone for COVID-19 cases with the daily average number of new cases doubling in the past week, Ohio Gov. Mike DeWine announced at a press conference Thursday.

Red is the third step in the four-step — yellow, orange, red, purple — rankings of the virus outlined by the governor. Red means there is a ‘“very high level of exposure and spread” within the county. DeWine said the number of COVID hospitalizations and intensive care cases in Southwest Ohio, which includes Butler and Hamilton Counties, also has doubled since the second week in June.

Hamilton and Montgomery Counties also are listed as red, while Warren, Preble and Clermont Counties listed as orange, a lesser rating with “increased level of exposure and spread.” Of the state’s 88 counties, 53 had the lowest ranking (yellow –”active exposure and spread”) as of Thursday. Another 28 were listed as orange and seven were red. None had reached the highest level — purple — indicating “severe exposure and spread,” although Franklin County was getting close, DeWine said. A red indication means residents are cautioned to limit their activities as much as possible to prevent the spread of the virus.

While cases are rising steadily throughout Butler County, the majority of cases are occurring in the zip code of 45014, or the southern part of Fairfield, which ranks as the hardest hit community in the county, with a total case count of 349 cases as of June 24, according to the county health department.

Butler County has expanded its testing options due to the rise in cases, said Marc Bellisario, the CEO/President of Primary Health Solutions. “We worked in conjunction with BCGHD (Butler County General Health District) to identify a testing site in Fairfield because that is what the data was telling us,” he said. In addition to the pop-up testing site in Fairfield July 2, PHS has been offering COVID-19 tests at its clinics since April.

According to the BCGHD the amount of cases in the county had been gradually increasing over the last few weeks, unlike spikes seen in surrounding counties. “However, when it comes to public health trends, what happens in Cincinnati or Dayton typically occurs in Butler County within a short time period,” Jennifer Bailer, Butler County’s health commissioner, said in a release.

“We are excited to have a partnership with PHS!” said Bailer. “They are acting as a kind of “strike team” with public health. When we see an uptick in cases, we can get pop-up testing there very quickly now. Previously we didn’t have that ability to do testing quickly— now we do.”

Bailer also is an external advisor for Miami University’s Safe Return to Campus Committee, which is working with many members of the Oxford and Miami community to ensure a safe return to school for Miami students.

Miami still plans for students to begin moving back into residence halls Aug. 10, with classes beginning Aug. 17. In its latest press release, the committee said, “We expect COVID-19 will be with us for the foreseeable future and are planning accordingly and of course while no one can guarantee a campus that is free of persons who have the virus or are otherwise ill, we are making several important changes to help lessen the risks.”

Miami plans on implementing a number of changes for when students begin to arrive on campus. The committee warned students that campus and personal workspaces will likely look different this semester, with appropriate signage and physical barriers where necessary to ensure the safety of all those on campus.

The release also states that all offices on campus that provide direct services for students or faculty will be open and functioning, but most offices will only accept meetings by appointment only, not allowing students to drop in.

When it comes to cleaning on campus, common spaces and other high-touch areas will be cleaned, sanitized and disinfected by custodial staff on at least a daily basis. Physical facilities will provide disinfectants and hand sanitizer for use by department staff and work units. Employees of the university will be encouraged to use the supplied disinfectants throughout their work day.

The university also stated that students and faculty should expect to continue to hold many meetings on a virtual basis, even if everybody is on campus. For in-person meetings, the school will be following local, state and federal guidelines, meaning no room should exceed more than 50% capacity, and all people should maintain six feet apart for physical distancing requirements.

‍
Miami released its Guidelines for Distancing and Hygiene that it expects all students and faculty members to follow. It includes daily monitoring of one’s own health and wearing face covering when working outside of a single person office. The rules and planning continue to evolve as new information becomes available, the committee said.