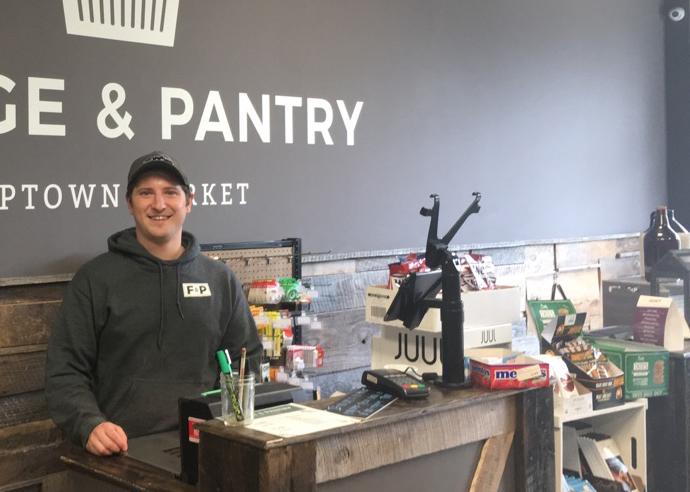 Cody Costanzo has a dream of hosting beer and wine tastings at Fridge & Pantry. Photo by Ryan McSheffrey

Cody Costanzo, one of the owners of Fridge & Pantry, understands how important flexibility is for entrepreneurs. That’s why the business he started as an uptown grocery that promised to deliver is now the newest place in Oxford with a license to sell beer and wine by the glass.

He’s been malleable in his approach to Fridge & Pantry: adapt to survive.

Costanzo said the initial concept for the grocery store/sandwich shop hybrid was primarily as more of the former: “We were more thinking grocery store … just kind of a market that was uptown that had another convenience of sandwiches and smoothies,” he said.

But the store, located at 35 E. Church St., with an interior marked by old, darkened wooden beams and planks, has been shifting its focus more towards its sandwich shop and smoothie bar since it opened in January.

Fridge & Pantry has removed a bunch of shelves on the right, grocery side of the store, and replaced them with tables and about 30 chairs.

Customers’ favorite sandwich is the Maple Honey Turkey, Costanzo said, and the Green Machine—so named because it has spinach—is the best-selling smoothie.

Costanzo, a Miami alumnus who grew up near Toledo, has experience opening up businesses: in 2015, he and friend Steve Thomas he started Root Yoga, which they recently sold. In January, they collaborated again to open Fridge & Pantry.

He likes to point out items he says stores like Kroger don’t carry, like a popcorn he first saw on Shark Tank: Pipcorn, a “non-GMO, gluten[-]free, whole grain” popcorn, according to its website.

Fridge & Pantry has had a license to sell beer and wine for take-out in the grocery section for some time, but will now be able to serve it on site. Licenses to sell beer and wine by the glass until 1 a.m., have been approved by the state. But Costanzo said he is not looking to break into the late-night bar business.

“I don’t think any of us would want to make this into a bar where people are hanging out at all,” Costanzo said. “We put a lot of work into making this place look nice.” The “us” he mentioned includes partners William and Mark Weisman, who are among the owners of Brick Street Bar.

Costanzo said the store will not serve beer or wine to complement the sandwich shop, and does not plan on applying for a license to serve liquor.

He said the beer and wine licenses will only be used for the tastings he envisions, as well as to fill beer growlers.

Costanzo said the store should receive the licenses to serve within a month, but might not begin hosting tastings until the start of Miami’s spring semester, which begins Jan. 28.

Fridge & Pantry is also taking it slow in its implementation of grocery delivery, but will launch the feature soon, according to Costanzo. Customers will be able to order groceries on their website, as well as on an app.

The store currently takes delivery orders for its sandwich shop and smoothie bar, and has done so on-and-off since opening.