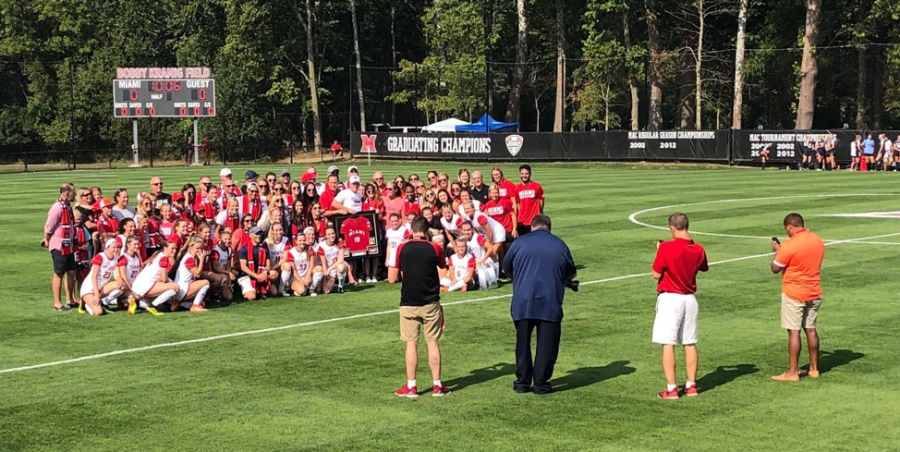 Kramig, center in white t-shirt, is surrounded by current and former players and coaches at the dedication of Bobby Kramig Field before the team played Xavier on Sept. 20. Photo by Massillon Myers.

For more than 3 decades, Bobby Kramig was the face of Miami soccer. With 356 victories combined during his tenure as men’s and women’s soccer coach, he was Miami soccer. He spent much of his time growing the sport at Miami and in Oxford, and on Sept. 20, he was honored on the field he spent so much time on.

Before the game against Xavier, the Miami University women’s soccer field was renamed Bobby Kramig Field in honor of the coach who built the program. Dozens of former players coaches came out to support their former coach.“A very humbling experience, it really was,” said Kramig at the women’s soccer game Sept. 27. “It meant a lot to me that we had such a good alumni turnout and so many familiar faces, a lot of them I hadn’t seen in many years came back, it was very touching.”

Beginning in 1997, Kramig guided the women’s program for its first 20 years. He had a record of 218-153-32 (.581 winning percentage), had four NCAA Tournament appearances, including three NCAA Tournament match wins, and four Mid-American Conference tournament titles.

His legacy is undeniable. Kramig was inducted into the Cradle of Coaches as part of the Class of 2018-19. Soccer is here at Miami and Oxford because of him.

An avid supporter of the community, Kramig created the “M” League, a youth soccer program that served the Oxford community for about 10 years while he was coach of the RedHawks. He incorporated his Miami student athletes as coaches in the league and stressed the importance of growing the game.

“We did it for about 10 years, it was a lot of fun,” said Kramig. “It was a really good thing for the community and kind of got soccer going in Oxford. It was a great community outreach thing it connected our players with local youth soccer players. It really attached our team to the community unlike any other team at Miami.”

Although the “M” league isn’t around anymore, the soccer legacy is. Oxford SAY (Soccer Association for Youth) Soccer League is one of the recreational soccer leagues in Oxford. With 300 kids between the ages of four and 14 in the league, the program emphasizes having fun and sportsmanship. Oxford SAY Soccer board president Isaac Greene compared it to the opposite of the Will Ferrell movie, “Kicking and Screaming.”

‍“Each season, we tell our coaches that winning is the objective, but it’s not our mission,” said Greene. “We want kids coming back season after season and having fun.” 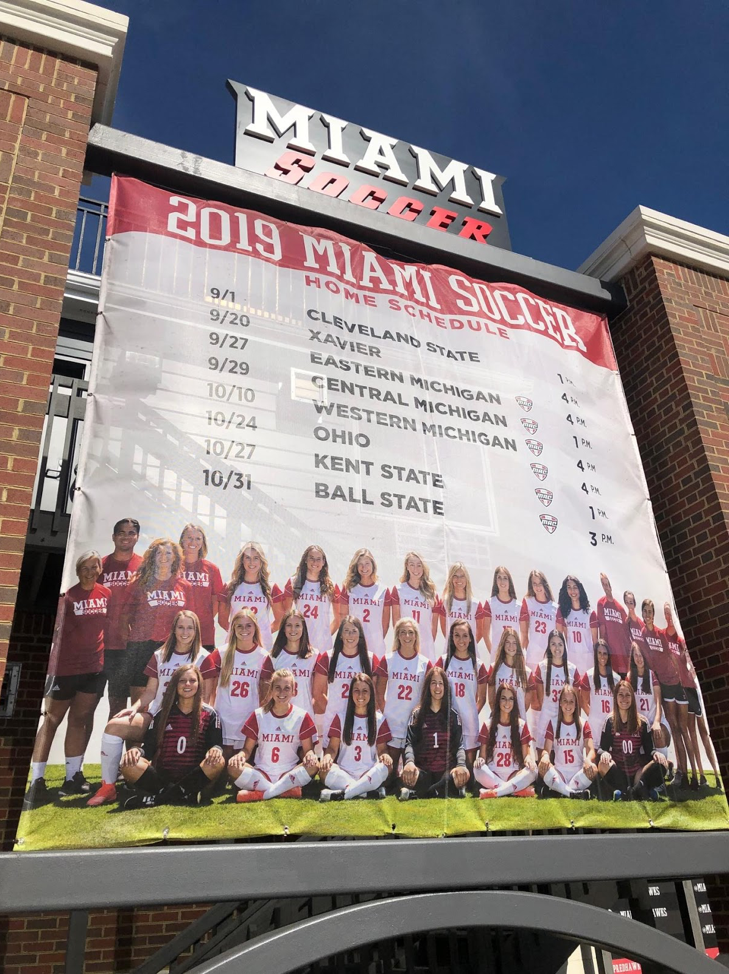 The new marquee outside of Bobby Kramig Field, which according to head coach Courtney Sirmans, will help during the recruiting process. Photo by Massillon Myers.

The league, just like soccer in the U.S. right now, is growing. In the past, the league has been structured so that teams are created randomly at the beginning of each season. What they noticed is that any team chemistry between players would be created and then the following year, teams would disperse. Due to parent and coach recommendations, the league switched to a more competitive model.

The league put together the Premier Soccer League which is an extension of the Oxford SAY Soccer League and had a trial season with two teams. There were tryouts for the teams and as a perk of being on this more competitive team and paying a higher fee, each team had a pro trainer who built up the athletes’ skills further than what a parent could. The kids then went back onto the teams that they were on at the rec level and helped their teammates improve using the skills and knowledge they gained from the Premier Soccer League experience.

“What we saw was an instant community impact,” said Greene. “For the first time, that anyone could recall in the community, we had all of our rec teams advance to the regional tournament.”

That was the first time that ever happened and in addition, one team won the tournament in its division and another team was runner-up. Those teams advanced to the state recreational tournament. All of this after one year of this new Premier Soccer League experiment.

Greene said they went all-in on year one and now have five teams in that division. Starting next year, the league will be changing its name to Oxford United.

“We’re using the baseball fields so we’re able to put together kind of a Friday night lights feel for these kids,” said Greene.

The game has grown immensely since Kramig got to Oxford in 1983. In addition to the soccer leagues and tournaments that are played in Oxford, the Miami women’s soccer stadium, now known as Bobby Kramig Field in his honor, was renovated over the summer. 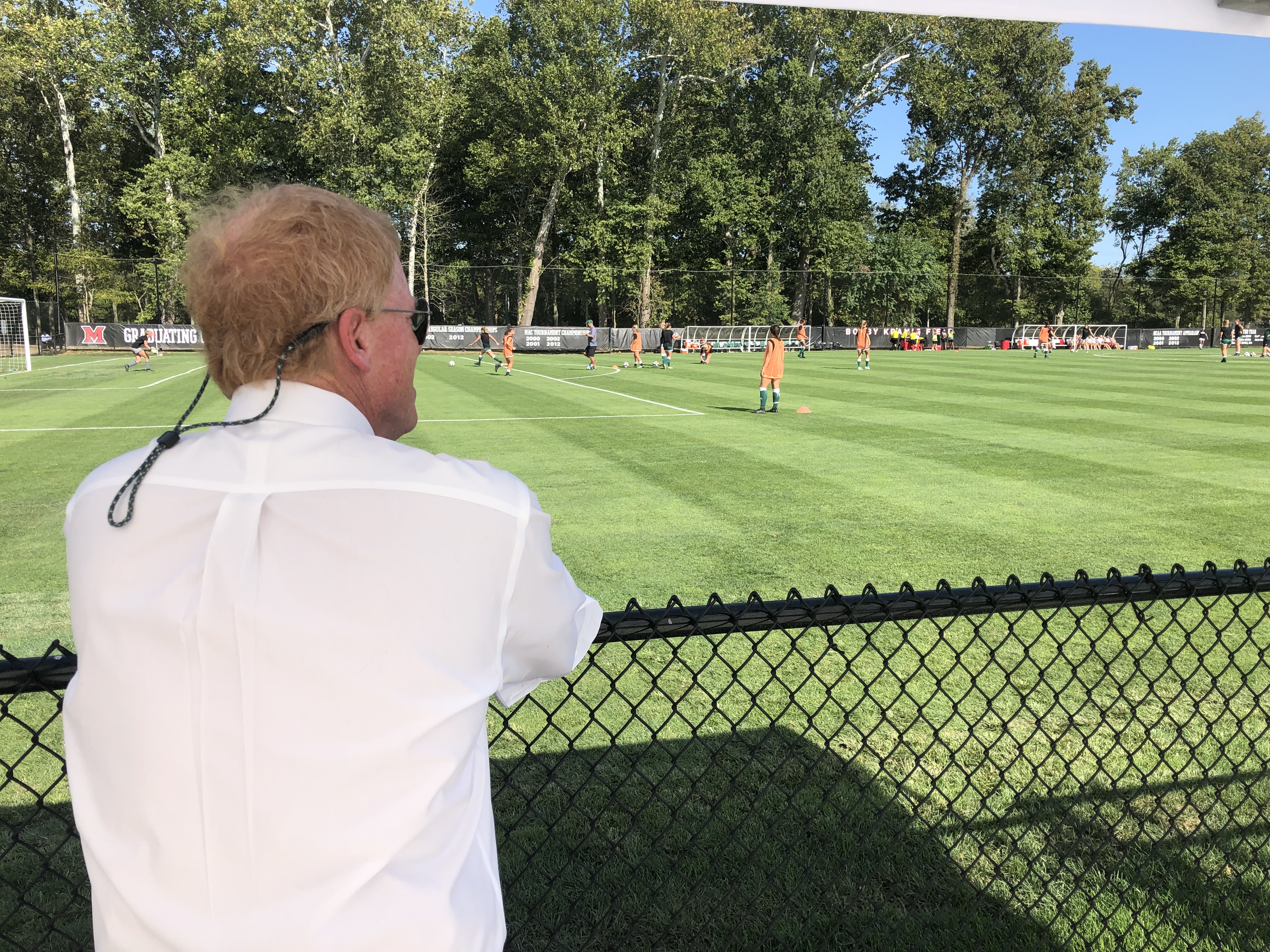 Now just a fan, Kramig looks over the field he coached for many years as the 2019 RedHawks warm up for its match against Eastern Michigan. Photo by Massillon Myers.

“We needed a huge facelift, it was long overdue, and I know Bobby had been working on getting that done for a long time,” said current soccer head coach Courtney Sirmans who took over in 2018 after Kramig stepped down. “Just to compete with the surrounding schools we needed it to just look and feel like a better atmosphere for our student athletes. The recruits loved it this past weekend, the girls love playing in it, it’s going to help recruiting immensely. At the end of the day, recruiting is our lifeline.”

Kramig recruited many of the athletes on the team so naturally, he comes to every game.

“I’m their No.1 fan,” said Kramig. “Other than running into one of the players uptown or at Patterson’s once in a while, that’s about the only interactions I have.”