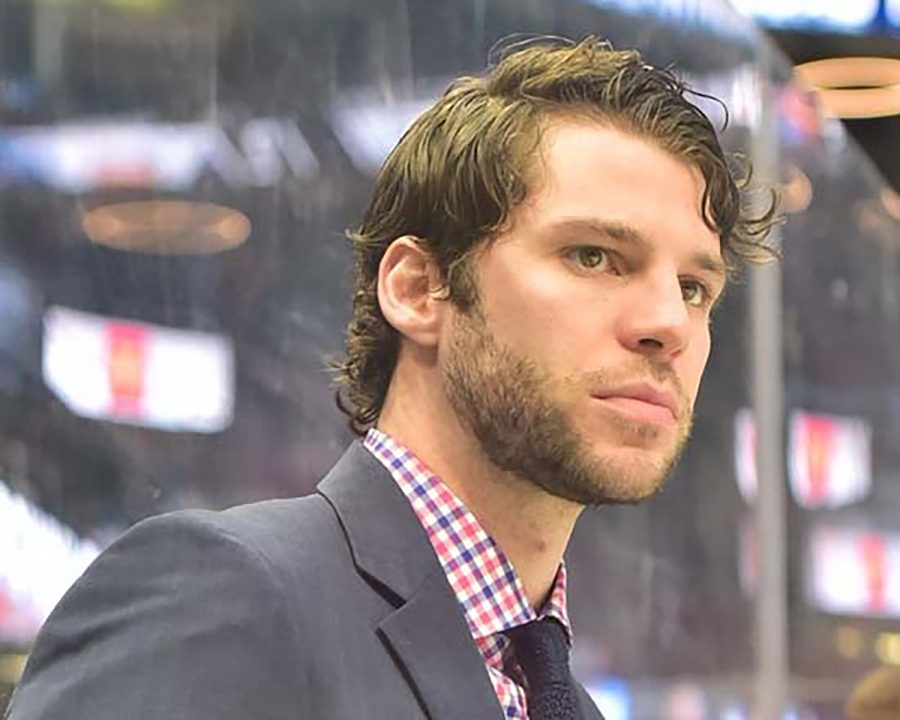 Trent Vogelhuber, a Miami hockey alum, will lead the Cleveland Monsters as its head coach.

In 2008, a stand-out hockey player from Dublin, Ohio committed to play for Miami University after he was unexpectedly picked by the Columbus Blue Jackets, 211th overall, in the final round of the 2007 NHL Entry Draft.

Trent Vogelhuber got another unexpected call from the Blue Jackets this year. After four years of assistant coaching for the Cleveland Monsters, the Jackets’ minor league affiliate team, he assumed the role of head coach for the club at age 33, becoming the youngest head coach in the American Hockey League.

“It’s unexpected,” Vogelhuber said. “But that’s what pro sports are, it’s all about being ready for an opportunity when it comes.”

Vogelhuber said that as a high school senior, Miami University’s competitiveness, the newly built Goggin Ice Center, academic opportunities and the small-town feel of Oxford were qualities all appealed to him.

“I had offers from good D-1 schools, around the country; the Michigan States’, the New Hampshires’, the Denvers’, and some Ivy League schools,” Vogelhuber said. “But Miami was the up-and-coming school.”

From the 2008-09 season to the 2010-11 season, Vogelhuber racked up 51 points in 149 games for the RedHawks. As a team, Miami never ranked below 18th with Vogelhuber, and twice advanced to the Frozen Four as a part of the NCAA Men’s Ice Hockey Championship tournament while also capturing a Central Collegiate Hockey Association (CCHA) regular-season title in 2011.

Among the highlights of his collegiate career was Vogelhuber’s goal against Boston University in the 2009 national championship game, one that was overshadowed by a miraculous 3-1 comeback which led to a heartbreaking 4-3 loss for the RedHawks.

Vogelhuber got his first taste of head coaching last year, as the Monsters’ previous head coach, Mike Eaves, dealt with health problems. This year, Vogelhuber’s status was made official.

“Trent has done a terrific job as an assistant coach over the past four years, including leading the bench at times during this past season, and has earned this opportunity,” wrote Blue Jackets Director of Player Personnel Chris Clark in a press release published by the Columbus Blue Jackets. “He is extremely bright, hard-working, and passionate about the game and we believe he will succeed in both developing our young players and putting a winning team on the ice for the passionate fans in Cleveland.”

Vogelhuber remembers his time in Oxford fondly. He graduated from Miami with a degree in political science.

“It was the best time of my life,” Vogelhuber said. “I didn’t want to leave. I know that a lot of pro athletes try to get out early to go pro, but I would have stayed if I could.”

After college, Vogelhuber spent seven seasons in the AHL. Near the end of his playing days, the Jackets’ former general manager, Bill Zito, encouraged Vogelhuber to become an assistant coach for the Monsters.

Vogelhuber was reluctant at first, having an existing family that included a wife and a newly-born son, but after weeks away from the ice to consider it, Vogelhuber became an assistant coach in the fall of 2018.

“My favorite part [of coaching] is being a part of something bigger than yourself,” Vogelhuber said. “Everybody is buying in for one goal and purpose, there’s no other high like it.”