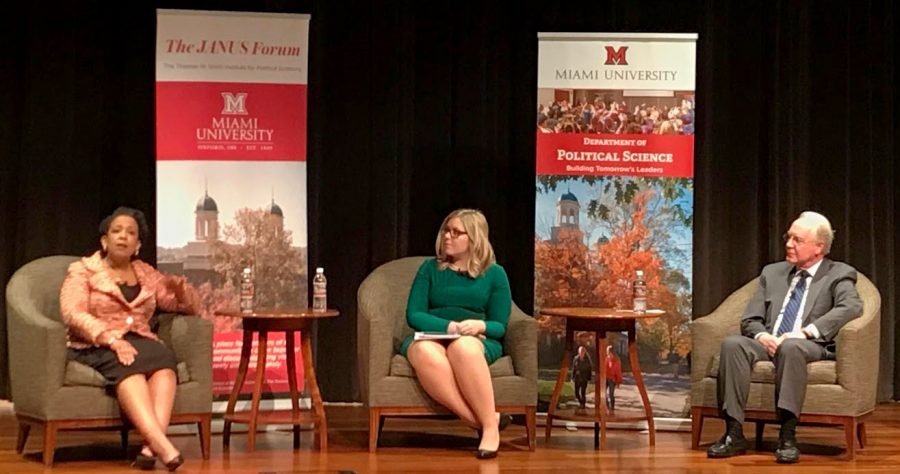 When considering overdose statistics, “the numbers are staggering,” Tom Price, former United States Secretary of Health and Human Services, said at the Miami University Janus Forum on Wednesday night in Harry T. Wilks Theatre. “Any other disease would get incredible attention.”

Ohio is in the top five states with opioid-related overdose deaths. In 2016, the state’s rate was 32.9 deaths per 100,000 persons—double the national average.

Comparatively, the national mortality rate of diabetes is lower with 24.8 deaths for every 100,000 people.

Overdoses result in over 70,000 deaths per year nationally. This number exceeds the amount of people expected to die from breast cancer in 2019, which is about 40,000.

The Janus Forum, sponsored by The Thomas W. Smith Project on Liberty, Democracy and Citizenship, the Miami University Department of Political Science and Office of Diversity Affairs, hosts an event once a semester.

The goal of the event is to foster a forum of different and often opposing ideas, from which the audience can formulate their own opinions.

“We try to get two differing perspectives like Democrat or Republican. We try to get speakers of equal caliber and expertise,” said Fowler.

Lynch served as the first African-American woman United States Attorney General from 2015-2017 after being appointed by President Obama. She received her law degree from Harvard Law School and has served as the U.S. Attorney for the Eastern District of New York.

Price served as the Secretary of Health and Human Services in 2017 under the Trump Administration. Price received his M.D. from the University of Michigan and practiced as an orthopedic surgeon. He has also served as a Congressman in the US House of Representatives.

Annika Fowler, Miami student and president of the Janus Forum, said she hoped that “talking about treatment, prevention, and legislation will give an interdisciplinary view of the issue.”

The event’s theme, Drowning in Drugs: The Opioid Crisis in America, “is very timely and relevant to the greater Oxford community,” said Fowler.

The March 4 edition of the police update noted that a 30-year-old woman was revived with Narcan, a generic nasal spray of the overdose reversal drug Naloxone, and one month earlier, a 46-year-old man was similarly revived after an opioid overdose.

Lynch and Price shared perspectives on the importance of prevention and treatment of addiction.

“Ninety percent of addicts aren’t in treatment,” said Lynch. She added that treatment accessibility is especially limited in rural communities, where treatment centers may be far away and do not always have adequate resources to accommodate a large volume of patients.

Price believes that Narcan should be accessible anywhere, in case of an overdose emergency.

He referenced AEDs, automated external defibrillators, that are on the walls in many buildings and public spaces in case of cardiac arrest. He argues that Narcan should be just as accessible.

Lynch informed the audience that “law enforcement is at risk also.”

Extremely strong synthetic opioids like Fentanyl can be absorbed through the skin, so police officers and first responders could be affected just by touching it. Some drug dealers also mix Fentanyl with other drugs like heroin, cocaine, and methamphetamine.

“Are we going to make it easier or harder for people in this country to stay alive?” asked Lynch.

Ohio Governor Mike DeWine recently announced $7.5 million to be spent over the next two years to fund 30 new drug courts in the state.

Butler County’s Court-Directed Addiction Treatment is a specialty court division under the county’s common pleas court. Its mission is to “enhance public safety by preventing recidivism, while assisting participants in taking responsibility for their behavioral health issues” while using “effective, evidence-based interventions and treatments in a holistic, accountability-based, community-supported approach.”

Both Lynch and Price agreed that such courts have the potential to mitigate the drug crisis.

“Drug courts work,” said Lynch, “if they have committed judges and strong and efficient treatment programs.”

Lynch emphasized that the opioid epidemic does not discriminate based on class or color. Drug overdoses claim 130 lives a day.

As a society, “we need to recognize that addiction is not a moral failing,” he said.

Lynch addressed the audience, noting that the importance of opportunities like the Janus Forum are imperative in “making sure all of you have the same friends five years from now.”